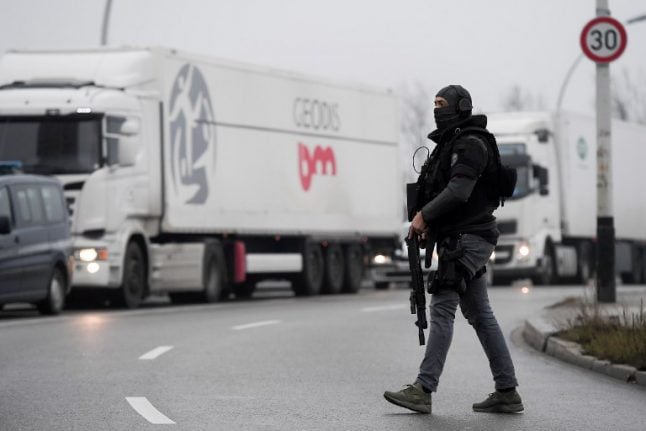 A huge manhunt continued in France and Germany on Thursday to track down Cherif Chekatt, the man authorities believe was behind the deadly terror attack in the centre of Strasbourg on Tuesday evening.

The attack took place Tuesday night around 8 pm (1900 GMT) in the heart of the medieval city as the market was closing.

Witnesses said the suspect, a 29-year-old Strasbourg native cried “Allahu Akbar” as he opened fire with a handgun and stabbed passers-by. On Thursday morning the French government confirmed that a third person had died as a result of the attack.

The toll now stands at 13 injured, with five still in critical condition, as hundreds of police search for the fugitive gunman, the prefecture said in a statement.

On Wednesday evening, with Chekatt still at large, French police issued a public appeal for help in hunting down the gunman. On a photograph released by French authorities the suspect has dark eyes, black hair and a short beard.

#BREAKING: Police Nationale have launched a call for witnesses to find the suspect in the shooting attack in Strasbourg. pic.twitter.com/DKDM6meS5q

Members of the public are warned not to approach “the dangerous individual” but to alert authorities by contacting the emergency number 197.

Around 720 police officers and other security forces are searching for him, Interior Minister Christophe Castaner said, and the public is being urged to alert police of any tips on his whereabouts.

Border controls have been stepped up particularly along the Franco-German frontier. German police are also on high alert given the possibility he slipped across the border on Tuesday night. President Emmanuel Macron has also requested that an extra 1,800 soldiers be drafted in to boost security at sensitive sites such as Christmas markets during the festive season.

German authorities were on the lookout for the fugitive “along the Rhine” river region, the interior ministry spokesman said.

“But at the moment we do not believe that he has crossed into the country,” he added.

Helicopters have been deployed and raids on homes linked  the suspect have all been carried out, but Chekatt has evaded all attempts to find him.

The last time he was seen was after getting out of a taxi on Tuesday night after carrying out his rampage. He was involved in a brief exchange of gunfire with police before fleeing. It's emerged that three members of the public tried to stop Chekatt during his rampage, one of whom was left injured after being stabbed.

It emerged he told the taxi driver that his attack was motivated by a desire to avenge “the killing of brothers in Syria”. Police fear the shooter, who was shot in the shoulder by a French soldier, could strike again.

Four members of his family, his parents and two brothers remain in police custody in France.

French prosecutor Remy Heitz revealed on Wednesday that Chekatt was a repeat offender and a hardened criminal with 27 convictions to his name mostly for violence and theft.

Chekatt was added to a watchlist of possible extremists while in prison in France in 2015 after he “called for practising a radical form of religion,” French deputy interior minister Laurent Nunez said on Wednesday.

He has since been monitored by France's domestic intelligence agency, the DGSI, which is occupied monitoring a large number of suspected extremists in France.

Some 25,000 people are currently on the “S” extremism watchlist, 9,700 of them for radicalism “linked mainly to Islamist terror movements,” according to the interior ministry.

“He is an individual who has unfortunately been known for a very long time for crime,” Interior Minister Christophe Castaner told French MPs on Wednesday.

“From the age of 10, his behaviour was already criminal. He had his first sentence at 13 years old,” Castaner said.