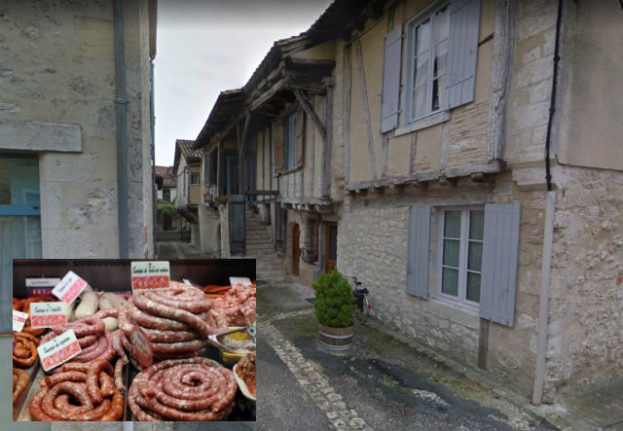 Photo: Google Streetview/AFP
For some, saucisse (or sausage) is as integral a part of French cuisine as baguettes, cheese and red wine.
But animal rights' charity PETA, which has its headquarters in the US, believes not only that the meaty food should be banned from menus but that it should also be banned from road names.
The association wants 'Rue de la Saucisse' (Sausage Street) in the small medieval village of Issigeac in the Dordogne to be renamed 'Rue de la Soycisse' after the vegan ingredient 'soy'.
At the end of November the charity sent a letter to the mayor of Issigeac Jean-Claude Castagner, officially asking him to change the name of the alley.
READ ALSO: The goal is to encourage “mentalities in France to evolve with regards to compassion for animals and a vegan way of life,” the association said.
And if the request is accepted, the association proposes to offer “a selection of the best vegan sausages to the residents of the street in question”.
At first the mayor of Issigeac, which has 750 residents, thought the whole thing was a joke.
“At first, I really believed it was a gag,” Castagner told Le Parisien. “But after checking, I realized that it was an official step.”
But in the land of foie gras and tete de veau (calf's head), it doesn't look like PETA is about to get its way, with the mayor so far refusing to rename the alley.
“It's nonsense and it's out of the question for me to do it!” he said.
The request seems particularly bizarre to one of the village's residents — and the only person who lives on Rue de la Saucisse — because, he says, the name is not actually a reference to meat.
In fact, the word 'saucisse' was a colloquial term for a female villager at the beginning of the 20th century, he said, due to the fact that they were often “stooped over” in a way that resembled the curve of a sausage.