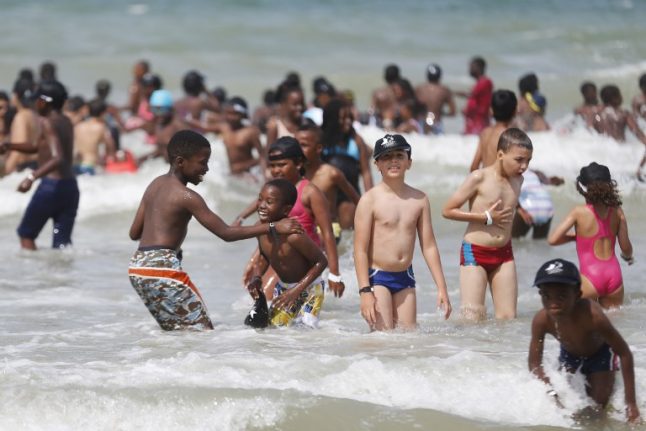 It's summer holiday season in France and although I know I should relax at the thought of long sunny days ahead and perhaps at some point sipping rosé by a pool –  panic creeps in instead as the countdown to the two-month school break begins.

As the mother of a seven and a nine year-old, the joy of shedding the hectic school runs and exhausting homework is quickly overshadowed by one panic-inducing question: “What are we going to do with the kids for two months?!”

I know I'm not alone.

On July 6th, school children in France will say goodbye to their teachers (never to return – well that's what it feels like to me) until September.

Every year, parents in France face the same dilemma – despite the common perception that French people don't work for weeks in July and August –  most of us only get two or three weeks off in the summer. And that leaves a massive six weeks at least to fill. The gap looms large on the calendar, I've been filling it up painfully, week by week, with my kids' activities as their summer holidays shape up. It's a painstaking process.

We're lucky. My partner and I are both freelancers and I have a French mother in law who loves to look after my kids. She's sweeping them off to the Normandy seaside for a week as soon as they break up from school. But that still leaves seven weeks to account for.

So what do most French kids do for two months? As with us, grandparents (if they are willing and fit enough) are the first port of call, and most children will stay with their papy et mamie at some point over the break – one of the mums from school is sending her boys off to her parents in Montpellier for the entire two months.

At this time of year, French train stations are buzzing with kids going to stay with family and the SNCF – the national rail company – has a reliable service that takes care of children travelling alone.

It's not quite so easy if the grandparents live in the UK or elsewhere abroad. Parents have to take time off to 'deliver' the kids – often by plane – and pick them up again, and that's expensive and takes planning. What are the other options? Much closer to home, for kids in school (from ages 3-14), there is the 'centre aéré' or 'centre de loisirs', which is a state-run day care/ holiday activity club set up in the local schools.

It's cheap and can be quite close to home (and sometimes even be in the kids' usual school if you're lucky), and offers a wide range of activities – swimming, trips to the zoo, picnics in the park etc… I remember feeling quite excited the first time my daughter went to the centre de loisirs – they had planned an outing to a fun park near Paris.

It sounded fun and she was looking forward to it – but I forgot to put her hat and suncream in her bag – and she got sunstroke and was ill for the rest of the week. I had to take time off work and now she refuses to go.

I can't blame her, the place was very noisy as there were lots of children running around and to her it felt like being in school. Still, many children enjoy it (especially if some of their friends are there too) and if the staff are good, there can be lots of interesting activities for them to do.

When my children were much younger and not yet in school, they stayed in crèche (nursery) for some weeks over the summer months. In France, younger children (three or under) who are in crèche during the year, can still go there for most of the summer holidays.

And if municipal crèches close then the Town Hall will often run whats known as “regroupement” which brings kids from different crèches together.

It may sound like a great solution at first to keep your youngster cared for if you can't take time off but the “regroupement” often takes place in a different crèche that can be much further from home and with staff and kids who your child is not used to.

It worked out fine for us as our crèche stayed open, but for some children who are in completely new surroundings with staff and other children they don't know, it can be hard to get used to (and a pain for parents to get to work on time if the crèche is far away).

And then, there is the colo. I grew up in France until I was 10 and I remember hearing – with a tinge of envy – about all the fun my friends got up to during their holidays (while I was with my grandparents) at the colonie de vacances – the French version of summer camp (although it extends to all the school holidays). This is a staple of French childhood – and most of my friends who went to one loved it. Some of these camps are subsidised and can be pretty cheap – but of course, some are better than others, and you'll usually hear about the good camps through word of mouth.

Kids can do pretty much anything, pretty much all over France: sailing, walking, climbing, drama, music courses, circus courses, revision, the list goes on. The 'colo' usually lasts 1 or 2 weeks.

So that still leaves a lot of time to fill. Most of us just juggle somehow. Or just give up. When my youngest was one, I packed all the family off to Scotland for 3 years – where the summer holidays are only six weeks long  – and I sent them back to France to their French mamie over the long break.

Whatever the children end up doing, planning is key. Whether you go for a colonie de vacances, a centre aéré or have to fly the kids home to your parents abroad, get organised as early as you can.

You'll find cheaper fares and be more likely to get a place for where your kids want to go. And you'll avoid that sinking feeling as the end of school draws near…