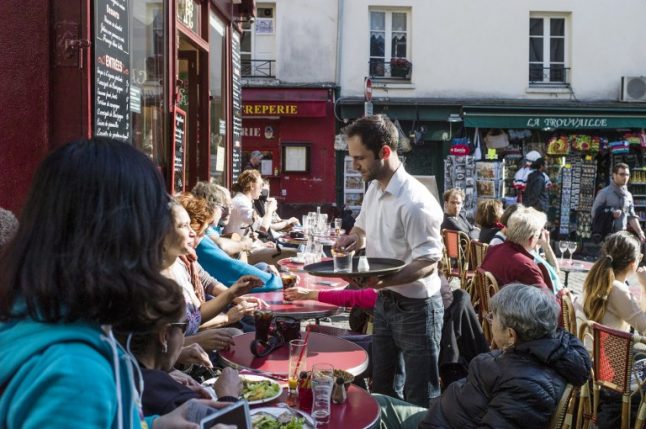 News that a French waiter is claiming discrimination against his Gallic culture after getting fired in Canada for being “aggressive, rude and disrespectful” went viral around the world this week.

Guillaume Rey said French culture just “tends to be more direct and expressive” and believed his sacking was down to his “direct, honest and professional personality,” which he acquired while training in France.
The story has got everyone once again talking about French waiters and whether or not they are as rude as they are often reputed to be.
And the short answer is they are not.
OK, we've all probably got a story of being a victim of the bad-mannered, impatient waiter, probably in a touristy area of Paris.

A few years ago a frustrated waiter came to serve me on a café terrace in the Saint-Michel area of Paris and told me in no uncertain terms to hurry up and order because he was cold being outside. (I ordered four hot chocolates and then ran. Or at least that's what I wish I had done.)

While no waiter or barman in the UK or the US is likely to ever say something like that, neither would the vast majority of their counterparts in France.
When waiters are more direct or simply rude, often language – or lack of it – is the cause.

But you'll find, even in Paris, the younger generation of restaurant “servers” are far more happy to converse in English, but are also far more likely to be just happy. (Photo: Tatyana A./Flickr)
But if we are going to pick on French waiters it's important to put them in context. Why not compare them with, let's say, waiters in America or even the UK now that the tipping culture has increasingly taken hold.
The one thing to console yourself with when getting the brusque treatment from a waiter at a Paris bistro, who is too impatient to give you time to decide between a cheeseburger or just a burger or won't help you translate “coq au vin”, is that at least you can be safe in the knowledge that he or she is genuinely in a bad mood.

It's not a trick, he's just had a bad day. In short, you know where you stand.

You can't say the same for the majority of waiters/waitresses in the US, who give you the impression you have made a new best friend for life as soon as you walk in the establishment.

Most of my dining experiences in the US started with an opening line from the waiter/waitress along the lines of “My name's …., and I am going to be taking care of you this evening.”

Look, give me informality over stuffiness any day, but do I really need to know your name? And if I wanted taking care of, I would have gone to the clinic or my big sister's house.

The irony is their efforts “to take care of you” actually leads to some pretty poor service. Now I realise this is based on just a few dining experiences so it's unfair to tarnish all American restaurants.

READ ALSO: The French are not rude, it's just one big misunderstanding But constant interruptions to check if “everything is OK guys,” or to fill glasses of water is irritating. Bringing main courses out while people are still eating their starters is a major faux pas. As is taking away plates just as the last forkful is entering your mouth, even though everyone else around the table is still eating.

In Paris the waiters will happily leave you long after your meal, whereas in the States I was given the impression it was time to move on as soon as you swallow that last forkful.

But we can't blame the individual waiter or waitress.

This over-friendliness and interventionist approach is of course geared towards getting the fattest tip possible at the end of the meal, and given that the waiters and waitresses are probably earning a pittance you certainly can't blame them for that. And it must be hard for them to be so nice to people all the time.

The problem is the whole tipping system, which can be worth up to 20 percent in the US or more, point to the fact waiters are just not paid a decent wage.

In France when it comes to restaurants it's basically the same attitude the French public has towards their country as a whole – “I pay my taxes so everything should be covered.” The cost of a meal, the table, the chairs, the cutlery and of course the service, is included. And if the service is bad, you might not be able to withhold your tip, but you can still complain, write a bad online review or just never go there again.

But the lack of tipping leads to a far more genuine and professional level of service.

Up until now my instinct in Paris has been to try to encourage friendly service by rewarding it with a tip.

But I may have to think again. I realize now that's a slippery slope towards the US-style system. I might have to keep my loose change in my pocket from now on before I end up hearing, “Je m'appelle Jean-Pierre et je vais prendre soin de vous.”

A version of this article was published previously on The Local France.