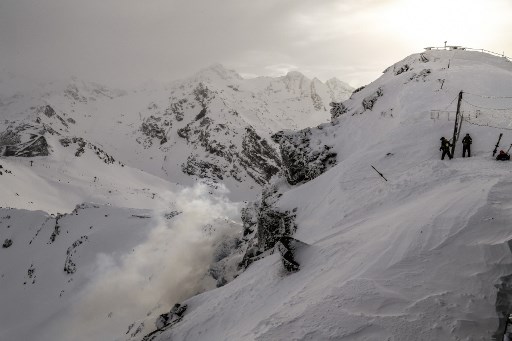 French officials have warned skiers to take extreme precaution especially when venturing off-piste. Photo: PHILIPPE DESMAZES/AFP
They said the pair hailing from the Paris region had been skiing on a slope in the Pisaillas glacier area of the Val d'Isere which was closed because of the avalanche risk.
They were found in a hollow surrounded by cliffs at an altitude of around 2,930 metres (9,670 feet) in the early afternoon.
The exact circumstances of the accident were not yet known, and prosecutors in nearby Albertville have opened an investigation.
This is one of a number of avalanches and accidents to have claimed the lives of skiers on France's slopes this winter season.
A cross-country skier was also killed in the region on Sunday in an off-piste area near the Giettaz-en-Aravis ski resort.
On February 15th, three French skiers were found dead in the Pyrenees after being buried by an avalanche.
Two weeks earlier, two British skiers fell “hundreds of metres” to their deaths near Chamonix after venturing off-piste.
The French Alps resort of Chamonix had been hit by huge snowfalls in the weeks leading up to the accident. Chamonix was put on avalanche alert and scores of holidaymakers had to be evacuated from chalets.
Throughout the skiing season, French officials have been warning skiers to take extreme precaution especially when venturing off-piste.