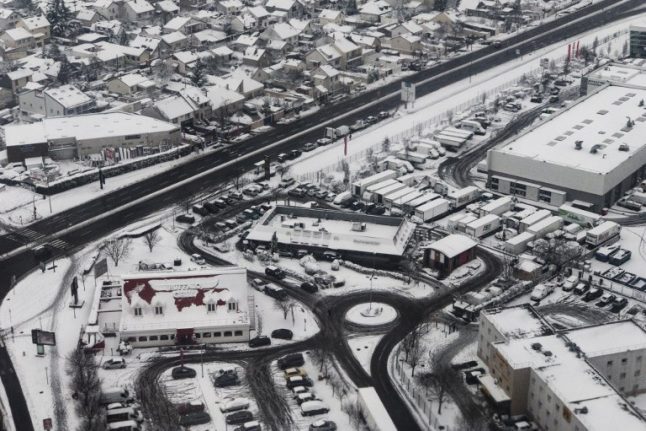 On Wednesday morning much of northern France including the capital and its surrounding areas woke up to a white blanket of snow after between 12cm and 15cm fell overnight.

There were also significant snowfalls around central and northern France with 20cm in the towns of Chartres and Orleans.

That prompted the ministry of the interior and police to urge motorists in the greater Paris region of Île-de-France not to get in their cars on Wednesday morning to avoid creating jams on the roads.

A spokesperson for the ministry of interior said: “2,500 police, firefighters, gendarmes SNCF and RATP staff are mobilised around the Île-de-France region to get things back to normal as soon as possible.”

Police chief Michel Delpuech urged motorists “not to take their cars this morning so as not to exacerbate the blockages and to allow emergency services and the forces of order to intervene when necessary.”

On Tuesday night the Île-de-France region recorded a record number of tailbacks stretching 739km in total as commuters headed home or at least tried to.

For many the journey turned into a nightmare with some unable to get home. There were reports of drivers spending the night in their cars while others were given emergency accommodation. On the N 118 French TV showed images of abandoned cars after the road became blocked on Tuesday evening.

Evacuations were still under way for the 1,500 to 2,000 people stranded on a highway south of Paris, prompting anger from drivers who said the route
should have been closed to traffic sooner.

One driver, Antonio De Lemos, told AFP he had been “stuck in the snow since 5 pm” and spent the night in his car.

“It's a natural event, but it's not normal because they leave all the roads blocked, without salting them” to remove the ice, he said.

Some 230 people spent the night at Orly airport while 700 slept in Montparnasse and Austerlitz train stations in Paris unable to catch a train home.

Operations were still disrupted at Orly and Paris's Charles de Gaulle airport Wednesday, with some flights facing delays while other travellers remained stuck.

Later on Wednesday Air France announced it was cancelling a number of flights due to the impact of the snow. At Charles de Gaulle airport, officials announced over loudspeakers that all suburban train connections to Paris had been cancelled for at least several hours.

A dozen perplexed passengers waited outside a railway ticket office at one terminal.

“I tried to get into Paris by train. I was sitting on a train for half an hour and then everyone got up and left,” said Paul Farberman, a 66-year-old music industry executive who had just flown in from Los Angeles.

“They said there are no trains and no buses,” he added. “I love Paris. I would just love to get there and see it.” On Wednesday certain roads remained blocked such as the N 118, with the interior ministry saying the situation on the roads remains “very complicated” on the main arteries in the Île-de-France.

The ministry insisted services had been mobilized but said the snow meant the they were facing an “exceptional” situation.

Heavy Goods Vehicles remain barred from the principal routes in the area, leaving trucks stacked up along the motorways until the crisis eases.

While workers were warned not to drive, France's rail chiefs SNCF also asked passengers to delay their journeys on Wednesday morning due services being severely hit, meaning for some it will simply be impossible to get to work.

“Rail traffic will severely disrupted this morning in the Île-de-France with less than half of train services operating,” an SNCF spokesman said.

A spokesman for SNCF told The Local the delays and cancellatons were due to various reasons such as trees having fallen on the tracks as well as heavy snowfall that covered certain lines.

READ ALSO: Parisians take to skis to make the most of the 'City of White' Equipment such as points  – the sections of track that move, acting as junctions and allowing trains to move from one line to another – had also frozen, the spokesperson said, adding that cold had caused material damage to some equipment.

Some 2,500 SNCF agents had been mobilized to clear the tracks and to ensure that all equipment was working safely.

Slobodan, a 46-year-old sales representative, said he had spent the night “going from cafe to cafe” near the Gare du Nord station in Paris after his
train was cancelled on Tuesday night.

He had been hoping to make it home early Wednesday “to take a shower, change clothes and get back to work at La Defense,” the business district west of the capital.

But “all trains toward the suburbs have been cancelled since 5:00 am,” he told AFP. TGV services will also suffer delays on Wednesday due to speed limits imposed because of the weather.

While most of the Paris Metro appeared to be running as normal there were problems on Line 5.

Bus services around the capital also remained suspended on Wednesday morning but transport authorities RATP hoped to get the buses back up and running throughout the morning. Tram services were also severely disrupted.

I found the tram and the impassible wave of snow that has rendered it immobile #Parissnow #ParisSousLaNeige pic.twitter.com/VBKsW8WxWE

At around 8am the roads in the capital were notably quieter than usual as many motorists appeared to have heeded the advice of authorities.

Roads in Paris notably quieter at rush hour this morning after the government urged drivers not to travel on Wednesday…. pic.twitter.com/vYX9N0f9cL

Certain creches were also closed in the capital as staff were unable to get to work.

Paris was one of several departments to activate its cold weather plan that ses extra accomodation opened up for homeless people. Many migrants and refugees camped out along the Canal st Martin in Paris spent the night in freezign temperatures and wkoe to find their tents covered in snow on Wednesday.

Must have been a tough night for these refugees who have been camped out alongside Canal st Martin in the 10th arrondissement for several weeks now… pic.twitter.com/khEWsio7cY

In all, some 25 departments across central and northern France remained on alert on Wednesday morning for snow and ice. The alerts are set to remain in place until Thursday morning although only light and sporadic snow showers forecast throughout Wednesday.

However forecasts for even lower temperatures are likely to freeze the heavy snow in place, making conditions even more treacherous, the Meteo France weather service said.

Forecasts suggest there may be more snow on the way on Friday.