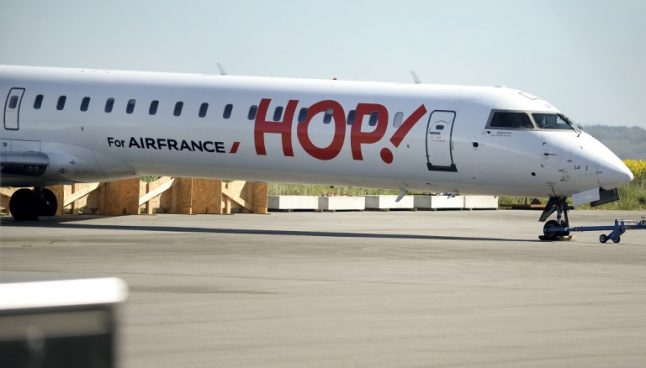 Photo: AFP
Thousands of people could be about to miss out on spending Christmas with loved ones.
The biggest union among Air France pilots, SNPL has voted in favour of striking if negotiations over the working conditions at its regional subsidiary company Hop! do not move forward.
The ongoing debate between Air France management and Hop! pilots includes a dispute over working hours, particularly concerning whether pilots should be asked to work with less than ten hours of break between the last flight of the day and the first of the morning, known as the “short nights” system.
Officially, the parties must come to a consensus before the end of November and if that doesn't happen, Air France has the right to dictate working conditions, something the SNPL is eager to avoid.
If the strike does go ahead, the SNPL could use its influence to convince pilots at other airlines to join in.
“A strike is extremely likely. There is a risk that the DGAC (France's Civil Aviation Authority) will try to avoid negotiating which is illegal in our opinion,” Christophe Tharrot, president of the SNPL told La Tribune.
However Air France's Managing Director Franck Terner is still counting on reaching an agreement in the next few days.
“If we do not sign by December 1st, we have the authority to pass the rules on working conditions for pilots without compromise. Of course, I hope we can come to an agreement,” Terner told industry reporters.
“We have submitted our rules to the DGAC. There are not many points of contention. I am confident,” he added.
If the strike goes ahead, it won't be the first time this year that Hop! pilots have resorted to taking action.
Over the July 14th weekend, flights operated by the budget airline were disrupted due to a strike.