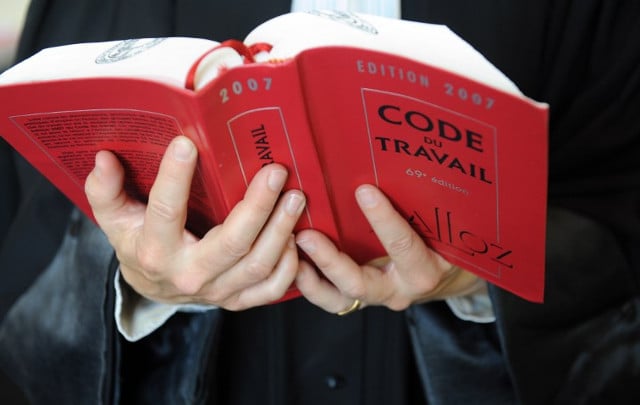 AFP
The changes aim to spur job creation by giving employers more freedom to negotiate conditions with workers and boosting dialogue between employers and their staff.
This is the first major reform of Emmanuel Macron's presidency.
Labour Minister Muriel Penicaud said the changes were aimed particularly at supporting small businesses.
Here are five of the key ones:
Cap on labour court payouts
Small companies live in fear of the “Prudhommes” – the labour courts that hear wrongful dismissal cases which often yield generous awards for aggrieved workers.
To help reduce the risks for employers, these awards will now be capped, starting at three months' salary for employees with up to two years of service, rising to a maximum 20 months' salary for employees with more than 30 years' service.
Workers will have only a year to make a case, down from two currently.
READ ALSO: Decentralising negotiations
On some issues, companies will no longer be bound by national law, with industry- or company-level agreements taking precedence.
Issues that will be decided sector by sector include the duration of fixed-term contracts and the number of times they can be renewed.
Staff bonuses are among the issues that will be negotiated at the company level.
More flexibility for small business
Small businesses with no union representatives will be able to negotiate directly with a representative chosen from among the employees on a range of issues, including pay and working hours, and put them to a vote.
In companies numbering fewer than 20 employees, if no one wants to represent the workers' interests then terms can be agreed to by referendum.
Previously, employers of companies with fewer than 50 employees were barred from bargaining directly with workers unless they had a union mandate.
The reform falls short of demands from employers' groups, which wanted companies with up to 300 employees to be allowed to negotiate directly with workers.
According to the government, this change will affect six million employees in France (around 30 percent of the total) and more than 80 percent of businesses.
But not everybody is happy about the changes, with Attac – a French anti-globalism movement – saying the move will allow “employers to negotiate downsizing in the way that best suits them”.
Easing redundancies
Companies will find it easier to offer voluntary redundancies, and multinationals also face fewer hurdles in laying off staff at struggling French operations.
International groups currently have to offer French workers jobs in overseas operations.
In return for facilitating layoffs, the government will increase minimum redundancy payments.
From one-fifth of a month's salary per year of service currently, the payments will rise to one-quarter of a month's salary per year worked.
Streamlining worker representation
To cut the time spent by employers dealing with bodies representing workers, three committees dealing with everything from pay to health and safety in a single company will be merged into a single body.
What happens now?
After going through several phases of consultation, the changes will be presented to France's council of ministers on September 22nd.
The government will then have three months to present a draft of the bill to the French parliament for ratification. If approved, the changes will become law.