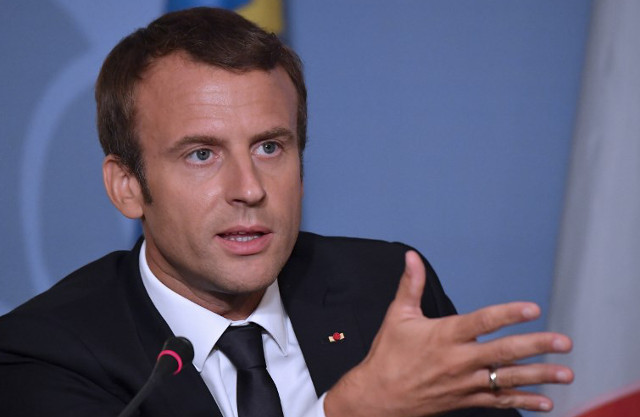 AFP
Before his election in May, the 39-year-old centrist vowed repeatedly to take on the country's powerful trade unions by overhauling highly protective and rigid labour regulations.
On Thursday, in an announcement that is keenly awaited by both business groups and his leftwing opponents, his government will publish planned changes that are set to be approved by parliament in September.
The measures are expected to curb the power of unions, limit severance pay and allow bosses to negotiate many working terms and conditions directly with their employees.
READ ALSO: AFP
In an interview published on the eve of the announcement, Macron said the overhaul had to be “ambitious and efficient enough to continue to bring down mass unemployment”.
“We are the only major economy in the European Union that has not defeated mass unemployment for more than three decades,” he told Le Point magazine.
Thursday's unveiling is a crucial test for Macron's domestic agenda as he seeks to encourage entrepreneurship in France, where the unemployment rate of 9.5 percent is almost double that of its large European rivals.
He warned last week that the French “hated reforms” and tried to avoid them as long as possible.
First major protests
The move is set to bring the first demonstrations against his government, with the CGT trade union, France's biggest, and the new political party France Unbowed set to mobilise their supporters on September 12 and 23.
Reaction from other trade unions will be crucial as Macron seeks to avoid a major confrontation following often-violent demonstrations last year against labour changes made by his predecessor, Francois Hollande.
During discussions with the unions which began in May, only the Communist-backed CGT has opposed the changes outright, with the more moderate CFDT and the hard-left FO so far signalling their willingness to negotiate.
The reforms come at a time when Macron's approval ratings are falling sharply, signalling the end of the honeymoon he enjoyed with the French public following his election.
Recent polls showed that only around 40 percent of French voters are satisfied with his performance in office, with the fall attributed by analysts to a mix of communication problems and political missteps.
The influential head of the employers' confederation Medef, Pierre Gattaz, has urged Macron to be bold with the labour market changes, which have been drawn up in secrecy.
“This labour law will be the bellwether of Emmanuel Macron's presidency and his desire to really reform,” Gattaz said Tuesday, echoing the views of many economists.
The changes will be unveiled in five presidential decrees on Thursday which will then be voted at the end of September by parliament, where Macron's Republic on the Move party has a large majority.
Leftwing opponents
Radical leftist Jean-Luc Melenchon, who finished fourth in this year's presidential election and heads the France Unbowed party, has called for a mass march against what he describes as “social welfare coup d'etat”.
The labour overhauls are likely to provide fresh ammunition for opponents of Macron who accuse the former investment banker of pandering to business owners with his programme, which also includes cuts to taxes and public spending.
“Macron, president for the rich?” asked a front-page headline in the left-leaning Liberation newspaper this week which focused on research showing that his proposed income tax cuts would mainly benefit the wealthy.
Critics of the labour code changes argue that they risk giving too much power to company owners who could force employees into longer hours or shorter holidays, for example.
At present, French labour law is enshrined in the national labour code, a red book which runs to around 3,000 pages covering everything from health and safety to contract law and pensions.
Macron's aim is to vastly simplify the code, enshrining basic employment protections in law but leaving companies, trade unions and employees to negotiate much of the rest — instead of requiring bosses to abide by terms negotiated by unions for the whole industry.
Michael Zerbib, the general manager of an engineering company with a staff of 60, told AFP this week that his chief hope was that the law would be made simpler for small businesses like his.
“For years we've been promised a simplification of the rules. But all we've seen is increasing complexity!” he said.