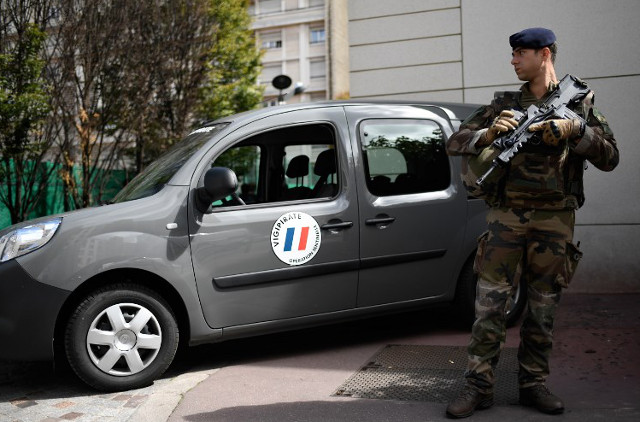 AFP
On Wednesday, a 36-year-old Algerian man was arrested after a motorway car chase and is suspected of driving a BMW into a group of servicemen in a suburb of Paris earlier in the day, injuring six of them.
Named as Hamou B., he was shot five times by police and was recovering in hospital in northern Lille and was not well enough to be questioned, a police source said.
The man, a taxi driver, had no previous convictions and was not on France's terror watch list.
The incident was the sixth attack on patrolling soldiers since 7,000 troops were ordered onto the streets in January 2015 after an attack by two jihadists on the offices of satirical newspaper Charlie Hebdo.
READ ALSO: AFP
Leftist lawmaker Clementine Autain charged Thursday that the force is counterproductive, telling French radio: “Most of their operations are aimed at protecting themselves.”
The soldiers form part of so-called “Sentinelle” force which patrols French streets and guards high-risk areas such as tourist sites and religious buildings.
In one dramatic incident, a 39-year-old man was gunned down at Paris's Orly airport on March 18 after attacking a soldier and shouting: “I am ready to die for Allah.”
On February 3, a 29-year-old Egyptian armed with a machete in each hand attacked four soldiers at Paris's Louvre Museum, shouting “Allahu Akbar” (God Is Greatest).
Right-wing MP Daniel Fasquelle called for an overhaul of the Sentinelle force.
He questioned whether the soldiers were adequately trained for the job of preventing the kind of terror attacks that have claimed more than 230 lives in France.
Vincent Desportes, former director of France's military academy the Ecole Superieure de Guerre, told AFP: “Since the beginning they have essentially served as targets.”
'Lightning rod'
Historian Benedicte Cheron agrees, telling the news magazine Le Point in a recent interview: “Let's face it: Sentinelle is a lightning rod that attracts lightning.”
But a lawmaker with the ruling Republic on the Move (REM) party defended the force, saying it “demonstrates the contribution of the French army… to the security of the country.”
In Wednesday's incident in the upmarket western Paris suburb of Levallois-Perret, the BMW rolled slowly down a quiet street, then accelerated as it neared the troops, ramming into them before speeding away.
Three of the soldiers sustained serious, but not life-threatening injuries.
Some 300 police later tracked down the rented vehicle on a motorway near the northern port of Calais, about an hour from Lille where the suspect is in
hospital.
Investigators are analysing clues found Wednesday during a search of the suspect's home in the Val d'Oise a suburb northwest of Paris, police said.
The Sentinelle force was set up after jihadist gunmen attacked the offices of satirical weekly Charlie Hebdo, killing 12, on January 7, 2015.
France has been under a state of emergency since the Islamic State attacks in Paris in November 2015, which left 130 people dead.
The Islamic State group (IS) has repeatedly targeted France because of its participation in the US-led international coalition fighting the jihadists, with French jets carrying out air strikes in Syria.