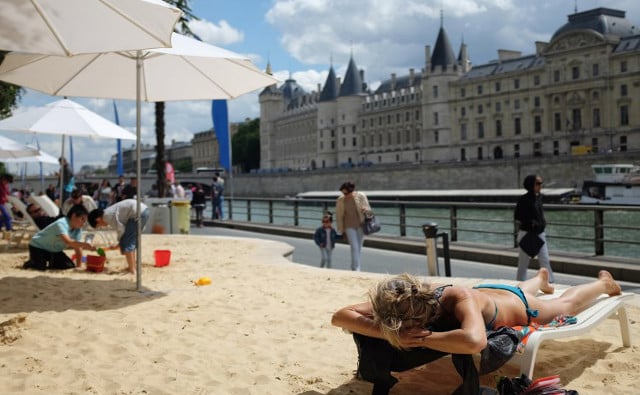 Photo: AFP
Lavender Festivals, Provence: Various dates
For lovers of lavender, July is a good time to visit Provence. The fields area sea of purple and you can take in some of the fragrant lavender festivals dotted around the region.
The Provencal village of Ferrassières will be holding their own celebration on July 2nd, so why not join the organised stroll through the spectacular fields as they share their expertise? Ylliab Photo/Flickr
The Avignon Festival: 6th-26th July
Founded in 1947, the Avignon theatre and performing arts festival has established itself over the past 70 years as a key fixture in France's cultural calendar.
In a packed programme of more than 60 events, visitors can enjoy shows, readings, exhibitions, films and debates.
This year's highlights include a Japanese production of Greek tragedy Antigone which will be performed with French subtitles, and a showing of Eye of the Storm, a new film about a young solicitor appointed to defend a rebel accused of committing war crimes Photo: AFP
Louis XIV, the Fire King – Fireworks show, Château de Versailles: July 6th, 7th, 12th and 14th
This summer Louis XIV returns to haunt his grand domain for a spectacle of lights, fire, video art and pyrotechnics in the Chateau's Orangerie gardens. The show will evoke the life and times of Louis XIV, culminating in a grand fireworks display worthy of a King who chose the sun as his personal emblem. Photo: Chateau Versailles website
International Festival of Baroque Opera, Beaune: 7th-30th July
Every year Baroque music enthusiasts descend upon the walled city of Beaune, the wine capital of Burgundy, for its International Festival of Baroque Opera.
It opens this year on the July 7th with a recital of Handel's Ottone, with other notable performances including the Accentus Choir singing Mozart's Great Mass in C Minor and the Accademia Bizantina orchestra performing music by Handel and Purcell with countertenor Andreas Scholl.
Concerts take place in the Basilique Notre-Dame and the Hospices de Beaune, a magical 15th-century almshouse.
Beauregard music festival, Normandy: 7th – 9th July
A rock, pop, and indie festival set in the grounds of the beautiful Château de Beauregard in Normandy. It is one of the leading alternative festivals in Europe with this year's acts including Iggy Pop, Metronomy and Echo and the Bunnymen.
Photo: Marie de Gouville/Flickr
Paris Plages: 8th July – 3rd September
Every summer, the Seine doubles up as a seaside resort complete with palm trees, deckchairs, ice-cream vans and 5,000 tonnes of sand. The brainchild of Bertrand Delanoë, a former Socialist Mayor of Paris, Paris Plages began as an initiative to give some summery respite to weary Parisians unable to escape the sweltering city during the hottest months of the year.
Since its inauguration 16 years ago it has gone from strength to strength. The project's centrepiece is a beach stretching through the beating heart of historic Paris from the Louvre to Pont du Sully; there is also another, calmer beach area at Bassin de la Villette with a water-sports complex and a library. Photo: AFP
Electrobeach, Le Barcarès: 13th – 15th July 2017
The biggest electronic festival in France will hit the south coast resort of Barcarès this summer. Global stars of house, EDM, and trance will play to over 100,000 festival-goers on the shores of the Mediterranean. David Guetta, Don Diablo, and Afrojack are just a few of the many musicians who will be producing the beats.
Bastille Day: 14th July
On France's national day celebrations take place all over the country and naturally no expense is spared in the French capital.
On the 13th and 14th, Paris fire stations are opening their doors to revellers for the traditional 'Bals des Pompiers' in celebration of France's national day.
On the 14th, the annual military parade will march down the Champs-Elysée in the presence of president Emmanuel Macron and his special guest, US president Donald Trump, as well as a huge flag-brandishing crowd. Later on, a kaleidoscopic fireworks display launched from the Eiffel Tower and the Trocadéro gardens will light up the skies of Paris. Photo: AFP
La Villette Open-Air Cinema Festival, Paris: 20th July – 20th August
Every year the grassy Parc de La Villette in the 19th arrondisement opens its gates for Paris' largest open-air cinema festival. It's the perfect way to enjoy a balmy summer evening in Paris, and, best of all, is totally free (unless you to opt to pay for a deckchair).
This year's theme is “In the Kitchen” with a programme that serves up a delicious mix of old Hollywood favourites like Sabrina, starring Audrey Hepburn and indie favourite Sideways, along with the Japanese Tampopo and Amarcord by Italian director Federico Fellini. Photo: Parc de la Villette website
Fêtes de Bayonne: 26th – 30th July
The Fêtes de Bayonne in the Northern Basque Country always draws huge crowds, and this year promises to be no exception. For five days at the end of July, the streets of Bayonne brim and bustle with exuberant parades, Basque food and music, tamborradas drum displays, bull running and fighting and participants dressed in red and white.
The festivities begin when King Léon, the festival's mascot, stands on the balcony of the town hall and flings the city keys into the crowd thronging below. This kickstarts five days of non-stop celebrations, which end on Sunday evening with a grand fireworks show and the departure of King Léon for another year.