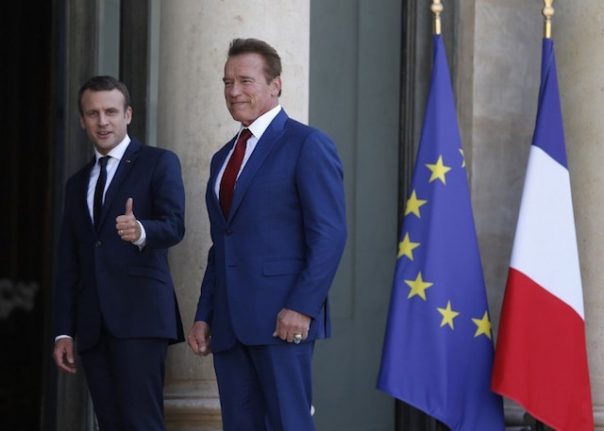 French President Emmanuel Macron with founder of the R20 climate action group Arnold Schwarzenegger. Photo: Geoffroy van der Hasselt/AFP
“It is absolutely imperative that we not make it a political issue,” he said.
“This is not the right versus the left because there is no liberal air or conservative air. We all breathe the same air. There is no liberal water or conservative water, we all drink the same water,” the star of “The Terminator” movies said.
Just a few weeks after US President Donald Trump announced he was pulling America out of the Paris Climate accord, Schwarzenegger said all countries had to work together in order to protect the environment.
READ ALSO: 'Make our planet great again' – Macron rebukes Trump (in English) for ditching Paris climate deal
“It is extremely important in order for us to be successful in creating a green and clean future for our children and grandchildren, which is a responsibility that we have, to hand the world in better shape to the next generation than we inherited it,” he said.
“We all have to work together in order to get this done,” he said, adding that he and Macron had discussed the climate issue in depth during their meeting.
He praised the French leader as a formidable force for France and for the world, particularly on environmental issues, which were something that “we both feel very passionate about.”
READ ALSO: France pledges €30 million for foreign climate experts

PARTNER CONTENT
Mayor of Stockholm: ‘We want to be the impact capital of the world’
Url copied to clipboard!