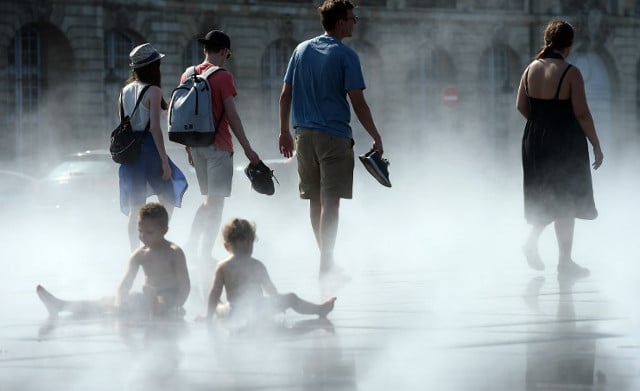 Photo: AFP
Most of France is baking under the sun after national weather agency Meteo France increased the number of departments on alert for heatwaves to 67 (see map below) on Wednesday afternoon. And to make life more difficult, a peak in pollution linked to the heat has hit the French capital.
The pollution problem has prompted police in the Paris region, where temperatures reached 37C on Wednesday afternoon, to reduce speed limits in some areas and divert heavy goods trucks, with the most polluting vehicles banned from the capital on Thursday. Photo: AFP
But despite the scorching temperatures, music lovers in France were braving the heat, as the annual Fete de la Musique – a nationwide celebration with thousands of free street performances – kicked off.
And in an attempt to reduce the risk of people getting ill from the heat, the national postal service announced that its postmen would be calling on elderly and disabled residents living alone to check they were alright.
This comes after the sad story on Tuesday of a body of a 31-year-old man being pulled out of the Loire river in the central city of Tours after he got dragged down by the current while trying to cool down.
READ ALSO: Photo: AFP
The heatwave, which has seen temperatures higher than those usually seen in July and August hit the country, is set to last until Thursday, according to Meteo France.
On Thursday it will advance into the Rhone valley in the south east while temperatures in the southern city of Toulouse and the northeastern city of Strasbourg are set to hit 36C.
In Paris, temperatures look set to lower slightly from Wednesday's peak of 37C to a nevertheless scorching 34C on Thursday.
Health authorities in the capital have triggered level three of France's heatwave plan as a way of letting people know to take action to protect the groups most vulnerable in the hot weather. Photo: AFP
French authorities take heatwaves extremely seriously, and it's little wonder. Back in August 2003, a heatwave killed 15,000 mostly elderly people across the country.
The warnings come soon after meteorologists at Météo France predicted that the month of June could be one of the top three hottest on record.
But for those who've had enough of the hot weather, it looks like there will be some relief at the weekend when temperatures are predicted to dip.