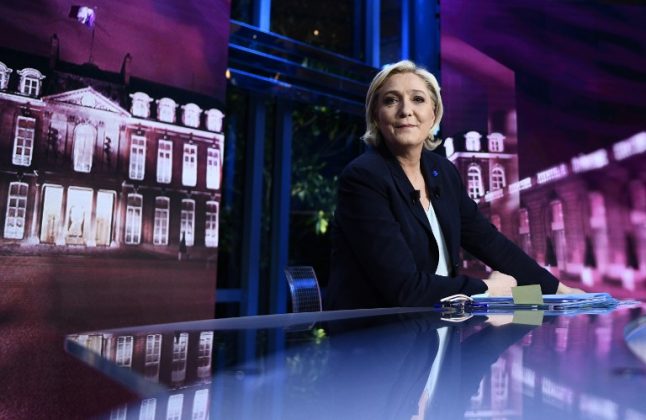 Photo: AFP
The first round saw Emmanuel Macron win 24.01 percent of votes, ahead of National Front (FN) leader Marine Le Pen on 21.30 percent.
In other words, 8.66 million French people voted for Macron, compared to 7.68 million for Le Pen.
You'd think that this difference would be enough to make things certain that Macron will win the second round on May 7th, especially given that pretty much every other first round candidate has urged their voters to block Le Pen.
In case you needed any more convincing that Macron will win, he is currently polling at 61 percent to Le Pen's 39. That's a 22 point difference.
The same Ifop poll, published on Thursday, showed a 25 percent abstention rate. But if there's anything we can be absolutely certain of – it's that nothing is certain.
And one French physicist and researcher at the Cevipov think tank has pointed out that there is indeed a chance that Le Pen can get over 50 percent of the votes.
But bear with us, it's a bit complicated and all to do with “unacknowledged abstentions”, meaning those who say they are going to vote for Macron, but don't actually end up doing it.
Essentially, according to Serge Galam, if Le Pen can get her support up a few points to just 42 percent (and she is certainly trying)… and therefore if Macron only has 58 percent of votes… then things could get interesting.
“If 90 percent of people who said they would vote for Le Pen do it, and at the same time only 65 percent of people who declared they would vote for Macron actually do it, then it's Marine Le Pen who wins the election with a score of 50.07 percent.”
You can take a look at his calculations below, in which you can see three different scenarios in which Le Pen can win. She is candidate “A turnout x” and Macron is “B turnout y” with a Turnout (T).

It's worth noting at this point that, according to pollsters Ifop, this voting intention doesn't match what people have said.
The latest polls (pictured in the infographic above) show that 88 percent of Macron voters plan to go through with it, the exact same percent for Le Pen.
But still, Galam's statistics are interesting (and you can read the 14-page PDF here if you want a thorough understanding). In short, he explains that Le Pen has a chance due to this “differentiated abstention”, which he describes as “a novel phenomenon which may well shake drastically this existing situation”
He concludes that in his “very simple analysis” (the jury is still out on this one), he has “proved that for the first time in the National Front history its candidate has a real chance of winning the race to become the next French President despite voting intentions about only 40-45 percent”.
But Galam insists he is not saying it will happen, just that there is a chance it could.
Of course, there are ways that Le Pen can win, as we have outlined here, but they would depend on a lot more than “unacknowledged abstention”.
They would mainly rely on Macron completely messing up, or the French not voting out of protest or complacency over the long weekend.
The French head to the polling stations next Sunday, May 7th, to decide who will be the country's next president.
READ ALSO: This is how Marine Le Pen could become the next president of France This story has been updated since it was published in late April.