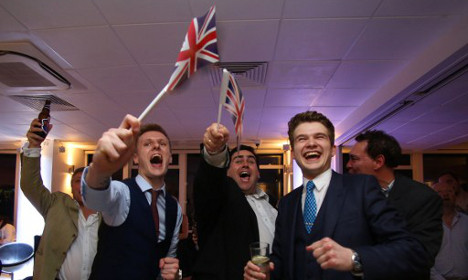 Photo: AFP
Readers fed up with all the negativity have asked us to try and put some positive spin on the result of the Brexit referendum and the economic fall out, which began even before the results came in.
It has not been easy, but we've had a go at looking on the bright side of Brexit for Brits in France.
Cheaper visits back home
With the value of the pound falling surely and swiftly since Friday morning – on Tuesday it was worth around €1.20 – life in France for those Britons who rely on income from back home will be more expensive. But on the flip side, it will certainly make trips home to see the family in Britain a little cheaper.
Christmas shopping at Harrods never looked so good. We've been here before
The fall in the pound is indeed worrying and Brits have told The Local they have already seen the value of their pensions cut. But the one thing to remember is that we've been here before.
“Back in 2008 we saw almost parity between the euro and the pound so at the moment its not too disastrous,” Victoria Lewis, a France-based financial advisor, told The Local.
“Most people I advise love France and they are not panicking yet,” she said.
Cate Carnduff from Herman de Graaf estate agents added: “The pound is always going up and down and around. We nearly had parity a few years ago and we didn't go out of business. At the end of the day people want to come to France.”
Get rich selling your house
But as well as those who pile through the arrival gates each year, there are hundreds if not thousands who return to Britain.
For people who already own property in France, now might just be the time to put it on the market. Thanks to the exchange rate you're going to be able to get more for your money back home. And it might even get better if you wait a little bit.

Here are top tips if you're thinking of selling up. And it's not all bad news for buyers
While it may become a good market for leavers (those heading out of France, not those who voted Out) the reality is that it's still not too bad for buyers either. While estate agents are clearly concerned, they say there are still many great deals out there for those looking to sell up in the UK and buy a house in France.
Nothing will happen for a while, if ever?
One thing that is certain is that nothing will happen for a while. And some, in fact many are suggesting that it will become so complicated for the UK to leave the EU that it might never happen.
In the meantime Olivier Campenon, president of the Franco-British Chamber of Commerce said British business folk in France just need to keep calm and carry on.
“Let's leave the political questions to the politicians and carry on doing business,” he told The Local.
Europe might become stronger
Of course, no one knows what will happen with the EU now that the UK has voted to leave. But its leaders, at least those from France, Germany and Italy, are promising “a new impulse” to the EU now that the “enfant terrible” has it made it clear it wants a divorce.
It may be that the British public's rejection of the EU, may force Europe to carry out the many necessary reforms to prevent other countries from following suit. And without Britain blocking the path, it may actually be possible to bring Europe closer together politically, which is what many economists believe is necessary.
In short, Brexit could give the EU an almighty kick up the backside and force it to take steps to make its economy stronger and to make the voters feel less disconnected from the decision makers.
France may benefit from Brexit
Although most economists believe France will take a hit, just like the UK, there are some who believe a Brexit is good for France.
Essayist Edouard Tétreau believes Brexit could be a massive “windfall” for Paris with many bankers, lawyers and managers deciding to head to Paris along with their companies.
Again, no one really knows, but maybe Paris could be the place to be if London declines. It's a great time to become French
It's often said that the French are the best dressers, the best lovers and the deepest thinkers. For those who've always dreamed of being one of them, this might be your chance.
What better excuse could there be to apply for French citizenship – if you qualify that is, than the potential troubles ahead now that the UK has voted Leave?
Becoming French would be positive on a number of levels, not least in integrating with the locals, who always appreciate a foreigner who makes an effort. You'll be forced to improve your French language skills, to qualify to become a Frenchie. Another positive.
In case you needed more persuading, here are ten reasons to become French. Again this all depends on what happens over the next two years but the Brexit could mean a surge in marriages between French and British couples in bids by the British nationals to gain French citizenship. L'amour is in the air the longer the uncertainty goes on.

To qualify for naturalisation through marriage you have to have been wedded for four years. For those unable to find a French partner, or at least one who is willing to marry them in exchange for a passport, all is not lost. You only have to wait one more year (five in total) to qualify for citizenship anyway.

Fewer Brits in “Dordogneshire”?
Dordogne in the southwest of France is so filled with British expats that it's affectionately known as “Dordogneshire”.
Brits move there to enjoy the quintessential “Frenchness” of the farmers markets and the beautiful countryside that reminds them of back home (but with more sunshine).

(Dordogne may see a drop in tourists. Photo: Johnny/Flickr)
Many Brits living in Dordogneshire complain that is has actually become too much like “New Britain” and not enough like “Old Britain”.
They may hope that the Brexit vote means fewer Brits come to France, so regions like the Dordogne might go back to the peaceful backwaters they were before the hordes of Brits invaded. It's a little selfish and inconsiderate perhaps, but you can't help the way you feel hey?
Slowing down of English invasion of French
You can scarcely exchange two sentences with a French person without hearing an English word or two peppered into their speech. According to a recent study, 90 percent of people speak a bit of franglais.
For the French language purists out there whose hordes include many British expats, the UK's exit from the EU can only be seen as a good thing for the preservation of the French language, as already expressed by French politicians.
A loss of influence of English and a resurgence of French could force many expats to learn the local language. As stated above, that's never a bad thing.
Better relations with American expats
There's nothing like commiserating about the trials and tribulations of French bureaucracy to bring people together. If Brexit happens, Brits would probably have to face the prospect of all kinds of administrative headaches and red tape that Americans have already been dealing with forever, so they're sure to make some Yankee friends who will certainly be empathetic about their plight, and will no doubt have some useful advice.