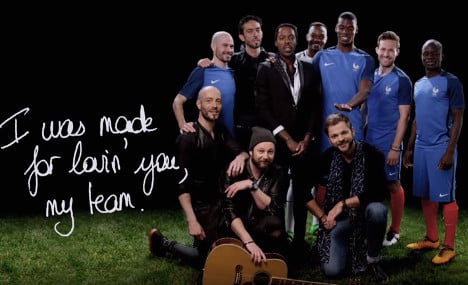 Photo: Screengrab YouTube/SkipTheUse
A French minister on Monday described as “incomprehensible” the choice of a song in English as the official anthem for
French supporters at Euro 2016.

Andre Vallini, the secretary of state for Francophony, said the French Football Federation's decision to choose a cover of “I Was Made for Lovin' You” performed by the French group (with an English name) Skip The Use was “very concerning”.

“Euro 2016 will be a great festival of sport which is taking place in France and will therefore project the image of our country abroad. And our language too!

“It is therefore incomprehensible that the anthem of the French national team should be in English,” Vallini said.

The song, originally performed by American rock veterans Kiss, has been renamed “I Was Made for Lovin' You, My Team” for the tournament.

Skip The Use's lead singer Mat Bastard said the group was asked to record the song ahead of others by French singers Charles Trenet and Jean-Jacques Goldman “because it was the song which meant the most to us”.

The guitarist Yann said there was no need to over react and that all that matters was whether the supporters liked the song or not.

The Local's readers suggested the real controversy was not so much the language but the actual choice of anthem.

I have heard “I Was Made For Lovin You Baby” at so many crappy french discos. This is entirely appropriate. https://t.co/bKb8gUWFfd

A Kiss song?! That should be the center of the argument here. https://t.co/1OiCCPXPdM

Euro 2016 takes place from June 10 to July 10 while the Eurovision song contest takes place on May 14th.