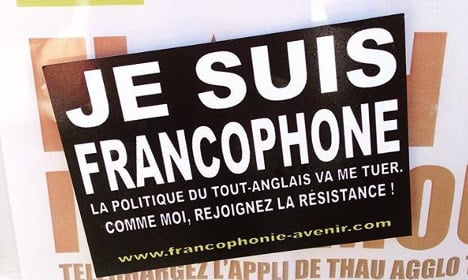 A poster urgers French-speakers to 'join the resistance' against English. Photo: Jon Worth/Flickr

It might be the official week for celebrating the French language, but even so, you'll hear plenty of French-speakers adulterating their sentences with scores of English words and phrases.

According to a study published for Le Parisien newspaper and carried out by Médiaprism, 90 percent of French people speak a little franglais, smattering their sentences with Anglicisms”.

“You can love them or hate them, but no one can get away from them,” laments Le Parisien.

“There’s never been so many anglicisms in our vocabulary, as many as ten percent, and it's increasing exponentially,” language expert and former English professor Jean Maillet said.

Anyone who has spent any time in the company of French people, or at least the younger generation, will have noticed how many English words, some of them false friends, the locals throw into their speech. Many of the words come from the worlds of technology and social media, and are often 'Frenchified', for example by adding the French verb ending 'er'.

They will often talk about “faire le buzz” or working “dans l’open space” or they might tell you they hope to “booster ma carriere.” Verbs like “bruncher”, “skyper”, “tweeter”, “forwarder” and “liker” are also common.

The survey revealed that some of the most popular franglais phrases were: “relever le challenge” (to rise to the challenge), “voyager low-cost” (travel low cost), “faire un flop” (to flop), “booster ses performances”, “sortir un best-of”(bring out a best-of).

Maillet says the reason so many Anglicisms are storming the French language is partly due to “linguistic laziness”, because many English words are shorter and more user-friendly than their French counterparts.

“They don’t sound nice on the ear, but we use them because they have become automatic,” said Maillet.

He says French people using English brand name words like “bulldozer” or “scanner” is understandable, but he denounces using franglais for the sake of it as “reprehensible”, because it eats into the French language and is unnecessary when French boasts such a rich vocabulary of its own.

“Why use the word “look” when our own language proposes: aspect, apparence, tenue, allure…” he said.

But the language expert also points to the influence of advertising.

French companies like Renault regularly use English in their marketing campaigns, to make their brand seem more international and trendy. While Renault had its “French Touch”, Air France had “France in the air” campaign. French insurance giant Axa would promote its “Happy Hours”.

New French start-ups are more often than not given an English name, or at least English-sounding one to make them more marketable, particularly if the founders have global ambitions. BlaBlaCar was once called Covoiturage until they saw the light and realized there was no way it was going to work abroad.

Although sometimes start-ups are so keen to choose a name which will work in foreign markets that they overlook different linguistics nuances, as the founders of Eat My Box (which sounds rather rude to English-speakers) found out.

France does have a body that tries to come up with French words to keep out Anglicisms, the Academie Francaise, but its efforts have often led to ridicule.

Their attempt to ban the word hashtag and replace it with “mot-diese” was mocked around the web, not least on Twitter.

And it was the same for these other words the French wanted replaced by Gallic versions.