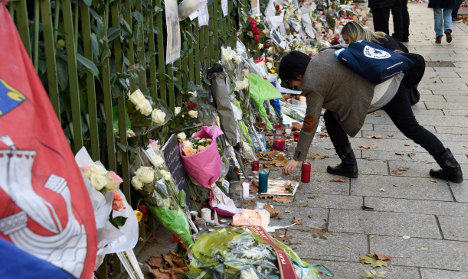 A makeshift vigil out the front of the Bataclan concert hall, where 89 people were killed. Photo: AFP
French President Francois Hollande will lead the tribute, which will take place at Les Invalides on the south bank of the River Seine in the seventh arrondissement.
Officials said that they decided to schedule the tribute two weeks after the attack in order to allow people time to grieve, and to allow the injured time to recuperate.
Over 1,000 people – mostly families of those killed – will be guests of honour, reported Europe 1.
The channel reported that the ceremony will see national guards each carry a photo of one of the 129 victims, followed by a speech from the president.
There has been no plans as of yet for a solidarity march, as there was after the Charlie Hebdo attacks of January, when over 1 million took to the streets of Paris in one of the biggest walks of its kind in France's history.
France remains in a national state of emergency, which will continue for the next three months.