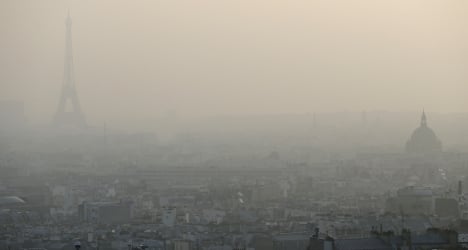 Public transport in Paris is set to be free on Friday due to high pollution levels. Photo: AFP

Paris authorities have requested emergency traffic-limiting measures to be put in place on Friday, as the City of Light and much of northern France suffers from a choking smog.

City mayor Anne Hidalgo asked national authorities to stop one in every two cars entering the capital and make all public transport free for a day in a bid to drive down pollution.

These emergency measures were last implemented almost exactly a year ago — on March 17 — during a particularly bad spike in the pollution levels. On Wednesday, the concentration of potentially dangerous particulates in the air went over the recommended maximum, pressing authorities into action.

According to one company Plume Labs, the level of these particles rose so high, that Paris became the most polluted city in the world for a few hours on Wednesday, topping the likes of the notoriously smoggy Shanghai.

"It only lasted a few hours and fortunately it's not reflective of the majority of the time," Romain Lacombe from Plume Labs told Le Parisien newspaper. His company measures pollution levels in real time for around 60 cities across the world.

In Paris, authorities measure the concentration of particulates with a diameter of less than 10 microns — so-called PM10 — in the air to determine pollution levels.

These particulates are created by vehicles, heating and heavy industry, and include the most dangerous particles that measure less than 2.5 microns in diameter, which can penetrate deep into the lungs and the blood system and can cause cancer.

The safe limit for PM10 is set at 80 microgrammes per cubic metre (mcg/m3).

According to a 2011 World Health Organisation report, the planet's most polluted city was Ahvaz in Iran with an average of 372 mcg/m3.

One study produced last year claimed that the air quality in Paris was so bad that it was the equivalent of being in a room with eight smokers.