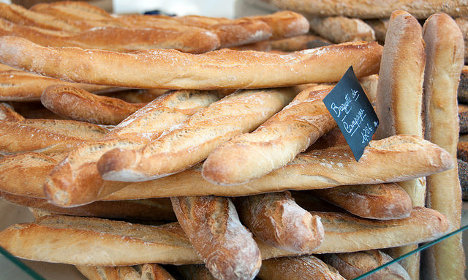 No more baguettes on Mondays for bread enthusiasts in Saint-Paul-les-Dax. Photo: Paul and Jill/Flickr
Baker Stéphane Cazenave, who has a boulangerie in the town of Saint-Paul-les-Dax, south-western France, holds the 2014 title of "best baguette in France".
But local residents won't be tasting his baked treats on Mondays anymore after officials stepped in.
Why? Because the bakery was twice found to have been open for seven days in a row without a break of at least 24 hours – which according to French law isn't allowed for any shop that sells bread.
While it might sound strange that this is a crime in France, Cazenave doesn't see the funny side.
He said that having to shut up shop for one day a week would mean a loss of €250,000, which would see his 22 employees hit hardest. He even said that he won't be able to keep all of them on the payroll.
"People see me like a thug just because I asked to work," he told French television channel FranceTVinfo. "Working shouldn't be a crime in France."
The news will no doubt turn heads for many shopkeepers across the country as France continues to discuss the new "Macron law" – a series of reforms intended to breathe life into France's stagnant economy.
The flagship reform on the bill that has caused the most controversy could see shops being allowed to open 12 Sundays a year instead of the five that they are allowed to open on currently.
The idea of shopping on a Sunday in France, particularly Paris, has long been a hot topic. Since Macron's law changes were put forward, there have been Catholic and union lobbies calling Sunday 'a day of rest', and the Economy Minister behind the plans – Emmanuel Macron – has even received death threats.
Macron, together with Prime Minister Manuel Valls, maintains that Sunday shopping would see an enormous boost in the woeful French economy and could potentially see tourists choosing Paris over London – a city where Sunday shopping is the norm.