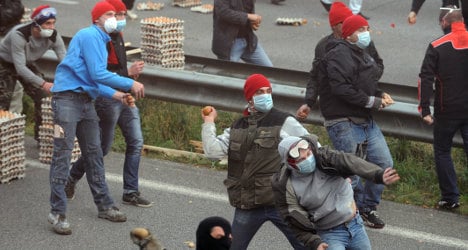 However, amid a growing revolt among workers in the western region,  one of the leaders of the anti-ecotax protests has given the government until noon on Wednesday to fully scrap the project.

“[We demand] an official announcement [by noon on Wednesday] of the abandonment of the ecotax in Brittany,” said Christian Troadec, mayor of the Finistère town of Carhaix, and of the leaders of the “Living, deciding and working in Brittany” movement on Tuesday.

In the result of the government’s failure to fulfil that demand, Troadec said there would “without doubt” be renewed protests and disruption to traffic in the region.

Some 1,000 members of the “Bonnets Rouges” movement – named after a 17th-century Breton tax revolt – clashed with riot police last weekend, and have destroyed 15 metal toll gates in the region, put in place to register vehicles’ movements for the purposes of the ecotax, according to L’Express.

The government has responded to the protestors’ demands with defiance.

The surprise suspension of the ecotax last Tuesday came after PM Ayrault held "emergency talks" with elected officials from Brittany.

Ayrault said the application of the tax had been put off across the country so the government can listen to opponents.

"Courage is not obstinance, it is listening, understanding," said Ayrault.

"This is why I have decided to suspend the implementation of this ecotax, to give the time needed for dialogue at the national and regional level," he added.

Critics have said the tax, first put forward under the presidency of Nicolas Sarkozy, would seriously damage Brittany's farming and food sectors by increasing transportation costs – driving some companies out of business and leading to major job losses.

Its suspension last week was welcomed by some, but slammed by France’s Green party, who are the junior partners in a coalition government with the Socialists.

Indeed, the Paris branch of the young Greens last week made a provocative protest against yet another climbdown on a green initiative, which came not long after a decision to ditch a planned tax on diesel fuel.

The group published a photo montage on their Facebook page showing a range of three pairs of fake testicles with the title: “A present from the young Greens to Hollande”.