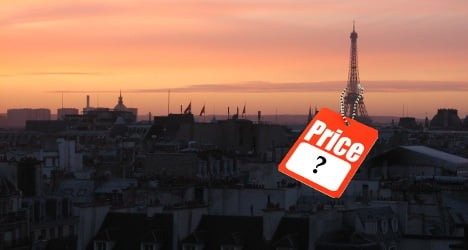 "I'll take it." How much would the ultimate property fantasy cost you - buying the whole city of Paris? Photo: Jess Wood

Everything has its price, it seems.

For some people, the ultimate dream is to own a splendid old apartment, or even a palatial "hôtel particulier", in some beautiful, historical corner of Paris.

Others, it seems, think even bigger than that.

If you wanted to purchase the whole French capital – all its homes, offices, shops, and a good chunk  of its monuments – what kind of figure are you looking at?

Historian Patrice de Moncan and real estate expert Gilles Ricour de Bourgies have teamed up to investigate the ultimate property fantasy – owning the City of Light – in their new book “Que Vaut Paris” (What Paris is worth) and have managed to come up a price tag.

According to the authors, you’re looking at a figure of €706 billion ($954 billion) if you want to get your hands on Paris.

Here’s how they settled on the price tag.

First, they used statistics from FNAIM (the National Real Estate Federation), of which Ricour de Bourgies is Paris region president, and found there were 1.3 million homes in the city.

Using average prices depending on the size of the house (one bedroom, five bedroom, and so on), its location, and its price per square metre, the pair calculated that the value of all the homes in Paris was a whopping €525.15 billion ($710 b).

Next, all those offices. According to BNP Paribas Real Estate Research, Paris is home to no less than 16.8 million square metres of office space. The authors calculated its overall worth at €142 billion ($192 b), according to French daily Le Figaro.

Then came the city’s famous boutiques. Using data from APUR (the Paris Urbanism Workshop), the authors discovered some 84,000 shops, with a total value of €36.63 billion ($54 billion).

Included in the €703 billion price tag are 30 or so historical monuments in Paris, but not the value of their contents. Interested? It'll cost you. Photo of The Louvre: Zoetnet/Flickr

However there is one snag that would have to be included in the small print of any deal.

When it comes to Paris's most famous monuments, all the big guns – the Eiffel Tower, the Louvre and so on – weren’t factored into De Moncan and Ricour de Bourgie’s calculations, so any buyer would have to shell out even more to get their hands on the Iron Lady.

Helpfully, the authors did have a go at estimating the value of some of Paris's renowned landmarks.

The Eiffel Tower would cost you roughly €2.8 billion ($3.8 billion), while the Louvre, home of the Mona Lisa, would put a €7.5-billion ($10.1 billion) dent in your accounts, according to their estimates.

The Elysée Palace, official residence of the French president, would set you back an estimated €1.2 billion ($1.6 b), while acquiring Gare d’Austerlitz as your own private garage would require a spare €1.3 billion ($1.8 b).

Looking for something a bit more realistic? Check out The Local's rental listings, and property for sale in France.