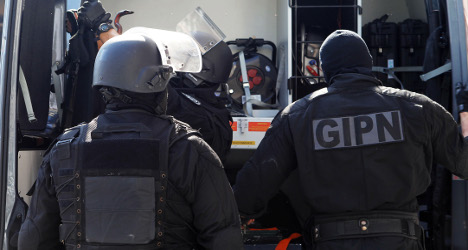 Anti-terror police (pictured above in this file photo) arrested a woman in Paris on Tuesday over suspected links to Al Qaeda. Photo: Jean Christophe Magnenet/AFP

The 21-year-old woman was held during a police raid on an address in the Belleville area of the 20th arrondissement in the east of the French capital at around 6.30am local time on Tuesday.

Officers from the DCRI (Central Directorate of Internal Intelligence) believe the woman has close ties to Al Qaeda in the Arabian Peninsular, known as AQAP, which is based in Yemen.

According to reports in the French media the arrest was carried out as part of a preliminary investigation for “criminal association in preparation for terrorist acts”.

AQAP is believed to be behind the online jihadist propaganda magazine Inspire, which is aimed at Western Islamist militants.

US media have quoted investigators saying Dzhokhar and Tamerlan Tsarnaev, the two brothers believed to have carried out the Boston Marathon bombings in April, had read the magazine and may have followed its instructions on making pressure-cooker bombs.

Copies of the magazine have been seized in other arrests of alleged radical Muslims in France.

Last week The Local reported how a webmaster from northern France was arrested and charged on Thursday for "provoking" and condoning terrorism. He stands accused of translating articles from Inspire into French.

The group was accused of recruiting French citizens for training at militant camps in Afghanistan and Pakistan.

The suspects had been arrested and convicted for membership of a criminal gang and for plotting terror strikes.

Aberouz was arrested on January 25, 2011 along with Pakistani-born Frenchnational Zohab Ifzal at Pakistan's Lahore airport, where an Al-Qaeda operative was supposed to meet and take them to a training camp

The shortest sentence was 18 months, for one of the eight who was still atlarge and sentenced in absentia.

France is battling homegrown Islamist radicals and has stepped up securitysince Al-Qaeda-inspired gunman Mohamed Merah killed seven people in and around the city of Toulouse last year.