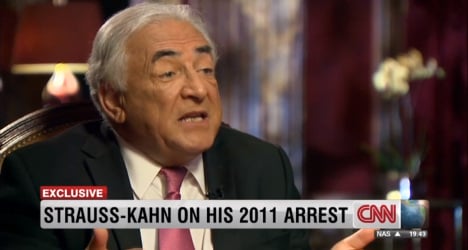 Former DSK chief attacks his treatment by the media as "terrible," after being arrested on suspicion of rape in New York in 2011. Photo: CNN/Screengrab

It was "the interview that every television channel dreamed of getting", according to French daily Le Parisien.

Former IMF chief and French Economic Minister Dominique Strauss-Kahn (known as DSK in France) went face-to-face with Richard Quest of US network CNN on Tuesday evening, slamming everything from his "terrible" treatment by the US media, to the "sheep" leading Europe at the moment.

Asked about the "perp walk" he was forced to perform before the world's news media, after being arrested on suspicion of raping a hotel chamber maid in 2011 at the New York Sofitel, DSK fumed: "I think it's terrible."

"The perp walk takes place at the moment when you're supposed to be innocent. So what happens is, you're just shown to everybody as if you were a criminal, at the moment where nobody knows if it's true or not…So it's just unfair to put people like that in front of the rest of the world…"

Turning his wrath towards the European Union, DSK then got philosophical in slamming what he called a "crisis of leadership" on the continent.

"There is an Arabic saying. An army of lions led by a sheep will always be defeated by an army of sheep led by a lion," he said.

The following is an excerpt of the interview from CNN.