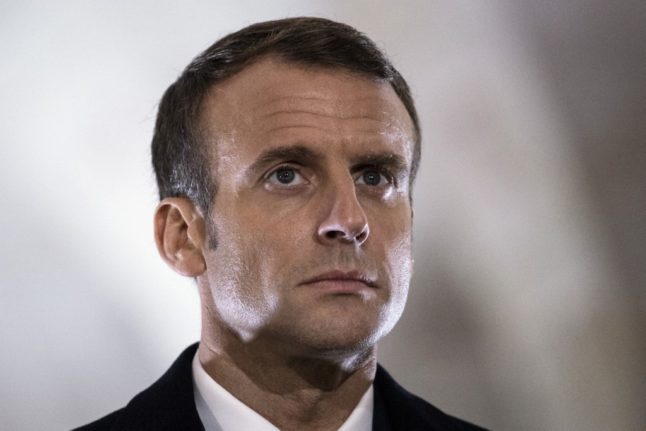 Prosecutors say the 13 members of the group, Les Barjols, conspired to engineer a putsch, which involved a plan for an attack on Macron during a public appearance in 2018.

None of the plots allegedly prepared by the 11 men and two women aged between 26 and 66 ever came to anything, which caused prosecutors to downgrade some of the initial charges over the course of their four-year investigation.

The main remaining accusation is a charge of conspiring to commit a terrorist act, which carries a maximum sentence of 10 years in prison.

A lawyer for the defence, Lucile Collot, said the prosecution’s case was based “on the fiction that a violent act was going to happen”, calling the accusation of a planned terrorist act “misplaced”.

In 2018, France’s domestic intelligence services received a tip-off saying that a far-right militant based in the French Alps region, Jean-Pierre Bouyer, was planning to attack Macron during a World War I peace treaty centenary commemoration in November of that year.

French anti-terror prosecutors began investigating on October 31, against a backdrop of boiling social anger in France over rising fuel prices which was later to result in the creation of the Yellow Vest protest movement.

On November 6 police arrested Bouyer, 62 at the time, and three others suspected of far-right links in the eastern French Moselle region.

Searching Bouyer’s car, they found a commando-style fighting knife and an army vest. In his home, they discovered firearms and ammunition.

Police then went on to arrest other members of the Barjols movement, an extreme-right nationalist and anti-immigration group formed on Facebook in 2017 and holding secret meetings.

Its presumed leader, Denis Collinet, was arrested in 2020.

One meeting held in the Moselle region marked the beginning of the conspiracy, with members making plans to blow up mosques and kill Macron as well as kidnap members of parliament and overthrow the government.

In posts on Facebook, Bouyer called on his followers to “eliminate those who want to harm you” and called Macron “a little hysterical dictator”.

During his detention, Bouyer told police that he had wanted to “kill Macron”, and hinted that one of his co-accused had hoped to approach the president during a meet-and-greet in a crowd and stab him with a ceramic-bladed knife, but later said the remarks had been just talk.

“He admits that there were such discussions, but they never went any further,” his lawyer Olivia Ronen told AFP.

The prosecution, she said, had failed to place her client’s hostile remarks towards Macron “in the context of the time”.

But investigating magistrates filing their findings to the court said that it was “an established fact” that the group’s plans “were entirely aimed at seriously disrupting the public order by intimidation and terror”.

The accused held “dissenting views on government” and made comments that were “sometimes extreme”, one defence lawyer, Gabriel Dumenil, acknowledged.

“But does that mean that they meant to take action, and make an attempt on the life of the head of state? The answer is no,” he said.

The trial is set to close on February 3.