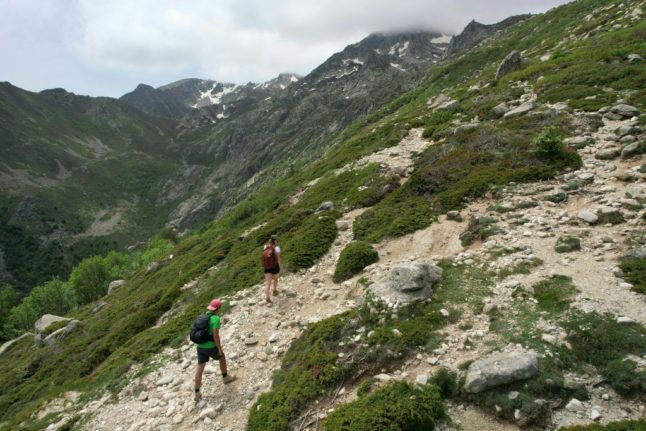 Not all the walks are quite as intimidating as the notorious GR20 in Corsica. (Photo by Pascal POCHARD-CASABIANCA / AFP)

Grand Randonees, local walks and vélo routes – France is full of them. In fact, it is estimated that there are 100,000 kilometres of walking trails in France, crossing the country in all directions offering spectacular views, lungfuls of fresh air and a beauty-filled and accessible way to keep fit and healthy.

We’ve selected 13 walks and cycle routes, one from each region, ranging from the gentle and easy to the incredibly difficult. There’s even a donkey in one of them;

Chemin de Stevenson hiking trail – The GR70 is the unprepossessing official name of an epic route also known as The Stevenson Path, named in honour of the Scottish author Robert Louis Stevenson, who travelled along it in 1878 and wrote about it in his book Travels with a Donkey in the Cévennes (the donkey was called Modestine, by the way).

It runs roughly north-south for 272 km from Puy-en-Velay to Alès, crossing through the Haute-Loire, Ardèche, Lozère, and Gard departments, although obviously you don’t have to do the whole 272km in one go.

Sentier des douaniers hiking trail  – A well-known route steeped in history, salt and sea spray. GR34 – to give it its official route name – starts from Mont-Saint-Michel and ends in Saint-Nazaire, following the stunning Brittany coastline out to Brest at the western tip and then back east.

It (mostly) follows old customs paths (hence the name which means customs officers’ path), in use up to the early 20th century, that allowed officers to patrol the coast from their guardhouses, which were at key observation points on the Brittany coast

Ideal for a family day out in the fresh air, or as a way of working up an appetite for some of Burgundy’s most famous produce.

La Vallée du Loir cycle path – This 330 km cycle path (the V47) starts at the source of the river between Beauce and Perche and ends of the banks of Loire at Angers.

If you still have some energy left, however, you can keep going because at this point it joins up with the older La Loire à Velo cycle path.

The GR20 hiking trail – Not for the faint-hearted, this one. The GR20 – so hard it doesn’t even get a friendly name – is recognised as one of France and Europe’s most difficult hiking challenges, running 180km from Calenzana in the North to Conca in the South.

The full route takes about 16 days to walk, and features steep climbs and descents in the north and tricky exposed ridges further south. You do get to enjoy the gorgeous and dramatic landscape of Corsica while you do it, however.

La Meuse à vélo cycle path – The Meuse Cycle Route – EuroVelo 19 – follows one of the most important rivers in Europe and welcomes cyclists of all levels.

It runs from the plateau of Langres via Hoek van Holland to Rotterdam, offering ever-changing scenery, with charming towns and villages on both banks of the river. In total the path is 1,050km long and takes in France, Belgium and the Netherlands.

Sentier du Littoral hiking trail – It’s officially known as the GR120, and its more prosaic name is no more inspired – Sentier du Littoral translates as Coastal Path – but this trail, which stretches along the Côte d’Opale, from the Belgian border to Berck-sur-Mer offers breathtaking views of the Baie de Somme.

In 2023, this route, which runs through Calvados and Orne was voted France’s favourite hiking trail, beating the GR120 (you may remember that as the Hauts-de-France walk listed here) and the GR71C Tour de Larzac.

You’ll need to be reasonably fit to do some of the hillier sections, but the views – particularly Rochers de la Houle, the Pain de Sucre, the Roches d’Oêtre – are worth the effort.

Passa Païs cycle path  – The Passa Païs is an 80km greenway that crosses through the heart of the Parc Naturel Régional du Haut-Languedoc, along the route of a former railway line, while enjoying a rich mosaic of landscapes.

Île d’Yeu cycle path and hiking trail – Just off the Vendée coast, you’ll find the tiny Île d’Yeu. You’ll need to take a ferry to get there, but – once there – you’ll find it is perfect for cycling or walking pretty much all year round.

You can bike to the beach, to the market in Port-Joinville or Saint-Sauveur. Or visit the Grand Phare or the Old Castle, enjoy a break at the small Port de la Meule, and admire the sunset at Pointe du But. Your choice.

Via Venaissia cycle route and hiking path – An easy one to finish with. The short, family friendly Via Venaissia route follows, in part, the old railway line that linked Orange to Isle-sur-la-Sorgue, which was last in use in 1938.

The 14-kilometre greenway reserved for cyclists and walkers takes in the exceptional views of Mont Ventoux and the Dentelles de Montmirail massif.

The famous Camino de Santiago ends in Santiago de Compostela in Spain, but one of the routes (Le Puy Camino) begins in France’s Auvergne area and meanders through the south west of the country before crossing the border into Spain.

You don’t have to go all the way to Spain, of course, there are lots of lovely sections in France, all well marked with the route’s logo of a shell. Some people just treat it as a hike, while others do it as a religious pilgrimage sometimes accompanied by a donkey, which explains why you’ll sometimes see a donkey tied up outside a supermarket, post office or tabac in south west France.