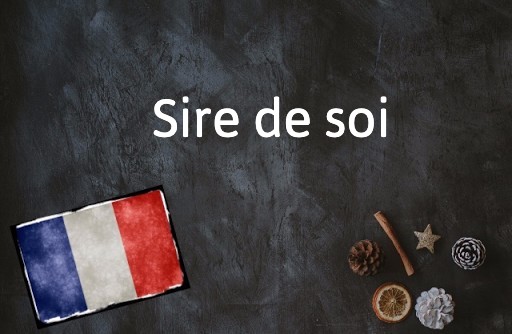 Why do I need to know sire de soi?

Sire de soi – roughly pronounced seer duh swah – is originally derived from the Norman dialect, and it is still used in Normandy, among other parts of France.

The expression may look very similar to the phrase “sûr de soi” which means to be confident in oneself, but sire de soi does not just have to do with being self-assured.

Instead, it deals with the idea of being master of one’s own home and being, having complete autonomy, freedom, and the right of self-determination.

The expression has been in use, in some form, since at least the 11th century in France, and it uses the French word sire is an honorific title for a sovereign (or Lord), but it can also be a synonym for “Mister” (Monsieur).

In the Middle Ages, the expression sire de was often used to designate the feudal lord who ruled over a specific territory, and in the Norman dialect it was written as “sire de sei” which eventually transformed into sire de soi.

The ability to be master over oneself became a large part of Norman identity, symbolising their independent spirit. The phrase is inscribed under the statue of Rollo, first Duke of Normandy, in Rouen, according to Le Figaro.