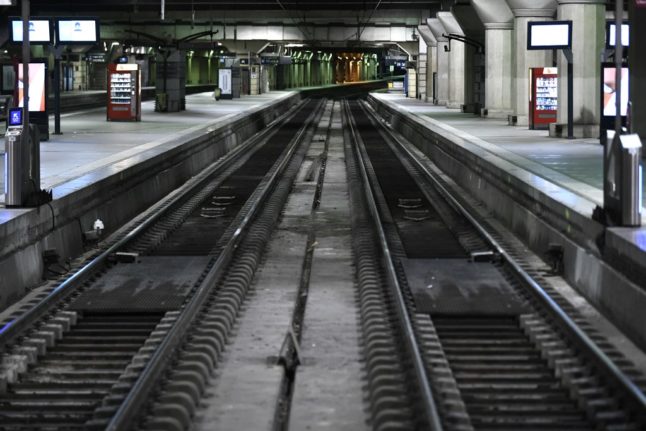 Services across France will be extremely disrupted on Thursday as workers strike in protest at Emmanuel Macron's plan to raise the legal retirement age from 62 to 64. (Photo by STEPHANE DE SAKUTIN / AFP)

The strike day announced is Thursday, January 19th, however it is described as “the first day of strikes and demonstrations”, so it’s likely there will be more to come.

All eight of France’s main union federations are backing the strike, which means that turnout is likely to be significant.

Oil refineries – Unions representing refinery workers announced plans for three strikes – the first on January 19th, alongside inter-sector walkouts, which will last 24 hours. The next strike would be January 26th and would last 48 hours, and the third is scheduled for February 6th and could last 72 hours. Unions have also threatened to renew the call to strike, and if necessary “shutdown refinery facilities” – similar blockades in October 2022 saw filling stations across the country run dry and drivers queuing for hours to fill up.

Shortages at service stations are not expected during the one-day strike on Thursday, but some stations reported shortages in the run-up to the strike due to panic buying.

Railways – Across the country train services will be severely disrupted, with more than 500 trains cancelled.

There will be virtually no Intercité trains running, while the budget Ouigo lines will be running 1 in 3 of their normal services. The local TER services will be the worst affected, with an average of 1 in 10 of normal services.

On the high-speed TGV services it depends on the region;

The Eurostar will be running with a ‘revised timetable’ on Thursday and Friday, with several trains cancelled. You can find the full list HERE.

Thalys, which connects to Belgium and the Netherlands, expects quasi-normal services. You can find specific information HERE. However, the Lyria (which goes to Switzerland) will be extremely disrupted and other international connections (eg Spain, Germany and Italy) will not run.

Nice – public transport in Nice will be “almost totally paralysed” on Thursday, with tram lines 1, 2 and 3 halted, along with numerous bus routes. The public transport service for people with reduced mobility, Mobil’Azur, is not expected to be operational either.

Several bus lines will not run on Thursday. Most public transport in Lyon will only run until 8:30pm.

Nantes – No intercité trains will depart from the Nantes station on Thursday, and several lines in the downtown area will have services disrupted between 10am and 2:30pm;

Air travel – A limited number of air traffic controllers will strike – and the French civil aviation authority has tried to minimise disruption by ordering that 1 in 5 flights in and out of Paris’ Orly airport be cancelled. Individual airlines may also cancel or delay flights, however, so travellers are advised to check with their airline.

Airport employees also plan to strike, which is likely to affect services such as check-in, security checks and baggage handling.

Ferry/ Channel Tunnel – no strike notices have been filed among employees of ferry companies or the Channel Tunnel so services are expected to run as normal. You can keep up to date here.

Road transport – unions representing truckers and other drivers have also called a strike, but although theirs will start on January 19th, the strike notice is for “unlimited” action, so it is likely to continue after Thursday.

In Paris, the city council told BFMTV that more than a quarter of elementary schools (172 out of 638) would be closed, and that 179 nurseries (crèches) out of 415 would also be closed.

Power cuts – there’s a possibility of some power cuts on Thursday as electricity workers belonging to the hard-line CGT union have published a ‘plan of action’ which they say will include restoration of electricity and gas to people on low incomes, free provision of energy and targeted power cuts. However this is just a small group of workers so it is unclear what the impact will be.

Public employees – local government employees are joining the strike call, so expect public offices like mairies and préfectures to be either closed or offering a limited service.

Police – police unions have called for a “massive” mobilisation, saying “it is out of the question for police officers to work for longer”. Gendarmes are part of the military and so are banned from striking but members of the Police nationale can strike – although industrial action from the police usually takes the form of protests or symbolic actions like throwing down their handcuffs.

Unions at France Télévisions have also given notice of an unlimited strike, starting on January 19th.

Banks – your bank may also be closed on January 19th as all eight unions representing banking and financial staff back the strike.

Unions are calling on all workers to “mobilise strongly across the country and take part in the union-organised events” and demonstrations are planned for most French towns and cities on Thursday.

More detail on services will be released nearer the time, but essential workers like rail staff must give 48 hours’ notice of their intention to strike – transport operators then release strike timetables 24 hours in advance showing which services will be running.

We will update our strike sector HERE with all the latest.

Is it only January 19th?

Unions are determined to fight the proposed pension reforms, while the government is equally determined to push it through – so it looks set for a long conflict and further strike days seem likely, while some unions have already declared that their actions will be “unlimited” – is they will continue after January 19th. A strike notice for ‘unlimited’ action can mean either a continuous strike, or repeated strike days.

On Saturday, January 21st there will be a demo in Paris against the reforms – the exact time and route is still to be confirmed, and there may be demos in other cities too.

You can also get the lowdown on the strikes in France and what might happen over the coming days and weeks in the latest episode of our free podcast Talking France.

You can download it on Apple, Spotify and Google here.

We will update this story as more information is released.