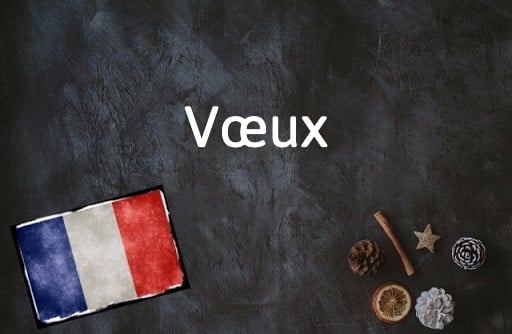 Vœux – roughly pronounced vuh – is the plural form of the word vœu, and it is formally defined as a “vow or vows.”

However, you are more likely to see it used to mean a “greeting” or “wish.” For example, if you buy a birthday card for someone, you might find a section for “vœux d’anniversaire” (birthday wishes).

But there is one time of year when you will hear this term a lot – at the start of the New Year, when politicians and celebrities offer their meilleur vœux – best wishes and aspirations for the year – to the public.

In English, it would be best translated as to send your “good wishes or greetings.”

Traditionally the president makes a speech to the French people at New Year, and this is known simply as Les vœux.

Some parts of the word’s traditional meaning can still be seen in its more common usage – as it is still intended to be a communication of deep wishes or promises.

Originally, vœux had a religious connection – representing a promise that one would make to a higher power in hopes of gaining their favour. It can still be used to describe the religious duties taken on by monks, priests and nuns.