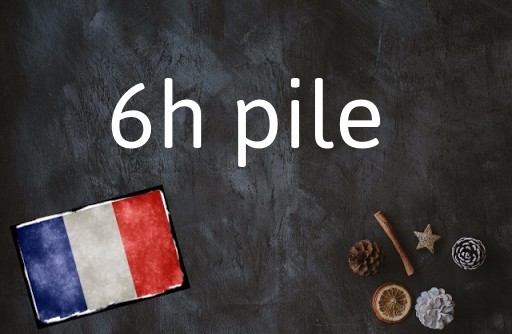 Why do I need to know pile?

Because if someone includes this word in pick-up or drop-off instructions, you may want to be on time.

Pile – roughly pronounced peel – looks a lot like the English word for a heap of clothes, and while it can be used in this sense in French, pile is most commonly translated as the French word for “battery.”

In colloquial language, however, the word has another definition altogether.

The term pile can also be used to mean “exact” or “sharp” when used to describe a moment in time. For example, if a friend tells you that you need to be at the train station “by 6am sharp” the French version would be: à 6h pile.

Pile is also used in this sense in some French expressions, like s’arrêter pile which means to “stop suddenly” or to “stop dead in one’s tracks.” You might also hear the phrase tomber pile which means that something has happened at exactly the right moment or at the perfect time.

Je viendrai te chercher à 10h pile. S’il te plaît, sois prêt. – I will come to pick you up at 10am on the dot. Please be ready.

Elle m’a dit qu’elle me retrouverait au restaurant à 19h pile, mais elle a quinze minutes de retard. – She told me that she would meet me at the restaurant at 7pm exactly, but she is fifteen minutes late.