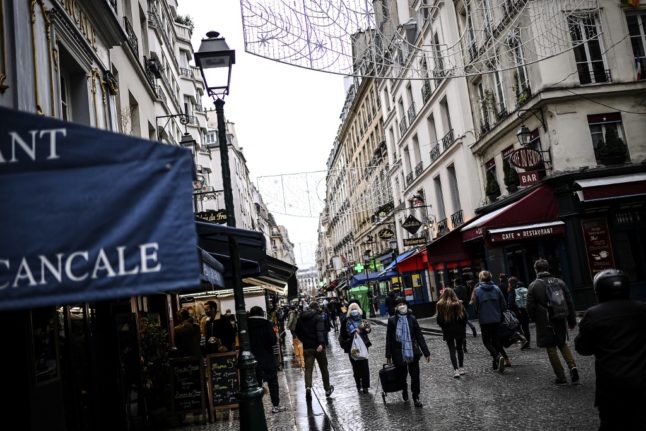 While the pandemic saw some people moving out of the cities in search of more living space, in Paris this trend pre-dated Covid-19 and has a more prosaic cause – a shortage of housing.

“In Paris, the population continues to decline, and has done so for nine years,” Insee said in its report. “These departures … are motivated in particular by the high cost of housing, the reduced supply of large housing for families and the search for another living environment.”

And it seems that although some people are moving to the country, or a cheaper city, the majority of Parisians are not moving far – instead they are hopping over the périphérique to the less-expensive suburbs.

The sharpest fall in inhabitants has been in the seventh arrondissement, where nearly 7,000 people, 12.6 percent of the population, have left.

“For years I have been asking the Paris City Council to create intermediate housing to allow families to stay in the VIIth,” arrondissement mayor Rachida Dati told Le Parisien. “Finally, I fear that the increase in property tax decided by the City will also accelerate the departure of those who owned their property.”

READ ALSO MAP: Which areas of France are set to see a population fall by 2070?

In comparison, the 18th arrondissement – one of the most heavily populated areas of the city – has lost more inhabitants, 8,000 but that equates to four percent of its population.

Only two areas of the city have seen an increase in population. The ninth arrondissement has seen the number of inhabitants increase by 1.3 percent, while the population of the fourth – despite high property prices – has jumped 8.5 percent.

“Since 2001, we have been pursuing a strong policy aimed at creating living spaces for all social classes,” Ariel Weil, mayor of Paris Centre said. “These figures confirm our strategy. We pre-empt, buy administrative and office buildings to transform into social and intermediate housing.

“The primary objective is for families to stay. We still have room for improvement in the 1st and 2nd arrondissements, where there is a lack of housing.”

Insee said the reason for the decline was a shortage of affordable housing for families, with people increasingly moving beyond the périphérique in search of suitable accommodation. It predicted Paris’s population would dip below two million in the 2050s.

Outside Paris, the suburbs are seeing strong demographic growth, Insee’s figures showed, with Paris the only département in the greater Paris Île-de-Frace region to show a population drop.

Driven by population surges in Aubervilliers, Pantin, La Courneuve and Romainville, the department of Seine-Saint-Denis now has 1,655,422 inhabitants, making “the 93” the second most populous department of Île-de-France behind Paris.

Thanks to a strong birth rate, resident numbers in Seine-Saint-Denis increased 0.9 percent year on year over the same period in which Paris saw a 0.6 percent decline.

But the birth rate in the département has averaged 1.3 percent since 2014.

“What we see above all is the Parisian phenomenon: a whole population is driven out by speculation … while we see a rejuvenation of our population with young couples moving in and therefore a dynamic of class openings for example,” deputy urban planner for Montreuil Gaylord le Chequer told Le Parisien as he predicted growth was set to continue.

READ ALSO Births, marriages and many deaths: Five things that happened to France’s demographics in 2020

With 113,116 inhabitants, Saint-Denis is the most populous city in the area, with Montreuil (population: 111,367) enjoying stronger demographic growth of one percent compared to 0.4 percent, thanks in part to improving public transport connections to the capital.

A major expansion of the Metro system is putting more and more suburbs within easy commuting distance of central Paris.

Population growth in Ile-de-France towns and cities outside Paris is exploding. The population of Romainville jumped 22.8 percent between 2014 and 2020. In Aubervilliers, the number of inhabitants rose 11.4 percent over the same period. Resident number jumped 18.6 percent in L’Ile-Saint-Denis, 10.1 percent in Pantin, and 14.6 percent in La Courneuve.

Banlieue boom: Why Parisians are moving to the suburbs

But the increased population brings additional problems, with facilities struggling to keep pace. Romainville is building a new 18-classroom school to deal with educational requirements, while daycare provision has to be doubled.

The problem is financial. Government allocation is based on Insee’s data – which, by the time it is released, is three years out of date. The mayor of Romainville estimated the resulting shortfall in funding is up to €1 million a year.

6 ways to get a round Paris without public transport

Keep in mind that some metro stations on lines that are operating may be closed. You can see the exhaustive list here.

On average, 8 in 10 of the normal services will run.

ON average, 8 in 10 of the normal services will run, a detailed timetable will be published on Monday evening.

The Eurostar has cancelled seven services – three from Paris to London, three from London to Paris and one from Brussels to London, but all other trains will run as normal. Find the full list of cancellations here

National and international rail services in and out of the capital will be severely disrupted, with 1 in 3 of the normal TGV services running and 2 in 10 of the normal TER services.

SNCF said on their website on Monday that Thalys trains (French-Belgian) will run “almost normal” and that Lyria (lines connecting France and Switzerland) will be heavily disrupted. You can see updated information on the SNCF website here.

There will be some cancellations of flights, but only those arriving or leaving at Paris Orly airport. The civil aviation authority says that this will affect flights arriving or leaving between Monday evening and 6am on Wednesday – anyone with a flight to/from Orly booked between those times is advised to check with their airline.

Air France announced on Monday that it expected one in 10 of its short to medium haul flights to be cancelled on Tuesday due to strike action. The company said that it did not expect the strikes to cause any cancellations for long-haul flights.

The airline said that those whose flights are cancelled may be eligible for credit or full refunds. Air France is also offering to no-fee postponements for travel until February 7. Customers were advised to check their flight status prior to leaving for the airport via the Air France app or website.

As of Monday, the civil aviation authority (DGAC) expected operations to run normally on Tuesday at the Roissy-Charles de Gaulle airport, according to Le Parisien.

Many schools in the capital will be fully or partly closed for the day – the last one-day strike saw just under half of teachers taking part, and a similar turnout is expected this time.

The main teachers’ union Snuipp-FSU said on Monday that around half of all nursery and primary school teachers would be striking.

Paris’s Hotel de Ville will be closed on Tuesday, so administrative appointments will have to be rescheduled, although city services such as bin collection will continue as normal. The Communist leader Fabien Rossel has called for town halls across the country to close in solidarity with the strikes, but the final decision is up to individual mayors. The arrondissements mairies, therefore, may be open as normal.

There will be demonstrations and marches across the country, including in Paris where a large turnout is expected. The march will begin in Place d’Italie at 2pm, marching towards Place Vauban where it is expected to end at around 7pm.