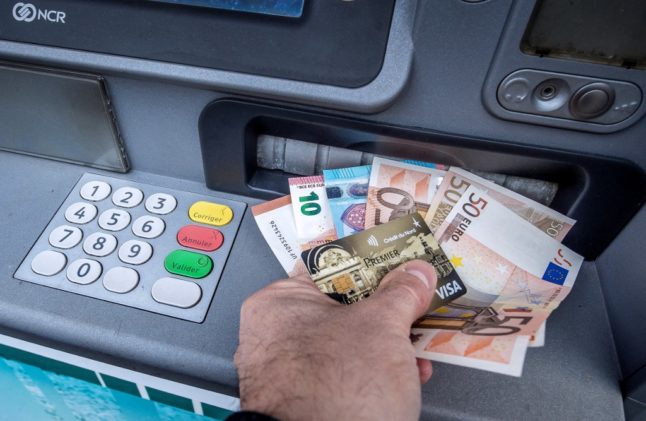 A man withdraws money from an ATM. (Photo by PHILIPPE HUGUEN / AFP)

The Local spoke with two financial advisers with experience working with expats – Maeve Hoffman from Spectrum Group and Cedric Bernier from Harrison Brook – to get tips investing for Americans living in France.

The United States uses “citizenship-based taxation” and what that basically means is that the IRS won’t let you go, even if you have lived outside the US for many years or even decades.

This means that Americans (and Green-Card holders) living outside of the US must continue to file American tax returns – but IRS rules also limit the type of investment products you can use in France, including life insurance and pensions.

Americans living in France can open a standard current account with a French bank (although opening a new account can be hard, due to something called FATCA).

They can also open a generic savings account, you can see a breakdown of the options HERE.

If you are looking to save in the short-term, and Cedric Bernier, financial advisor at Harrison Brook with expertise working with Americans living in France, says that generic savings accounts – like the Livret A – are a good choice.

However, you must keep in mind that US citizens must disclose any non-US bank accounts that held $10,000 or more at any one time in the year – you do this when you file your annual tax return, you have to include a Foreign Bank Account Report (FBAR).

For those who have over $200,000 in non-US financial assets, then they must report them in a specific form (the 8938) which is also to be filed alongside an annual return. You can get more information on this HERE.

If you want to see a little more return on your investment than the interest on a standards savings account, you might begin looking at financial products.

The next thing Americans should be aware of is Passive Foreign Investment Companies (PFICs). These are pooled investments registered outside of the United States – whether that is a mutual fund, an exchange-traded fund (ETF), a hedge fund, or certain types of insurance products.

Maeve Hoffman, qualified financial adviser and partner at Spectrum Group, explained the reason owning PFICs as an American is complicated: “With funds, there is growth happening in the background, and the financial institutions are not set up to provide the level of detail required [by the IRS].”

“I describe a lot of these types of investments like a box. The physical box might be called an ‘Assurance Vie’ and what goes in the box depends on you and your risk appetite, but inside the box it is doing lots of things.

“For US citizens, there is no box. You must declare every year what is happening inside, and a lot of financial institutions either can’t or won’t provide that level of detail. It’s not that the fund is doing anything weird or wonderful that should cause the US to have issues. It is like a blender that is moving all the time, but the U.S. reporting wants to know what all the underlying activities are.”

For this reason, Americans should avoid the “Assurance Vie” plan in France – a common package that’s offered by many high street banks.

While this may sound like a life insurance policy, it is actually a life insurance wrapper that holds investments. It is a great tool for being tax efficient and can offer alternatives to the regimented, traditional French inheritance process.

For Americans living in France, however, the Assurance Vie is likely to bring them a world of pain, because it is considered by the IRS as a PFICs, which means it is subject to complicated tax requirements.

“It is death by a thousand cuts,” Hoffman said, warning Americans to avoid opening an Assurance Vie.

If you’re working in France, you might be offered a private pension plan by your employer – but you need to check carefully whether the IRS considers this a ‘pension’ or not.

French pensions are only taxed in France, but there are some products that France considers a pension, but the IRS does not – usually products where you can take the cash out after five years.

READ MORE: Americans in France: What you need to know about your pension

Americans living in France should beware of opening a PEA (Plan Épargne Action), since this “is not considered a pension” by the IRS and is “taxed yearly,” Bernier explained.

While it is possible to open a PEA, and it can be invested in stocks, rather than funds, Americans will not “get the tax benefits, like tax deferred growth,” according to Bernier.

But it’s not just buying French financial products that is complicated – moving outside the US means that you’re also limited on American products.

This is something that Americans should be aware of about US-based mutual funds and ETFs. Typically, to buy a mutual fund, you will need to demonstrate an American address (and often, residency as well). This makes it very complicated to purchase a fund. As for US-ETFs, recent European regulations regarding “Packaged Retail and Insurance-based Investment Products” (PRIIP) require a “Key Information Document” (KID) when purchasing a US-ETF in the European Union, which is unfortunately often not made available.

According to Cedric Bernier, there are options available, but Americans looking to purchase US-ETFs should work with a cross-border financial adviser who has expertise on the subject.

So what options are available to Americans?

So with all these restrictions and problems – what are the best options for Americans in France? Our financial advisers said that the best options are property and individual securities/shares.

Shares – “In terms of no reporting back to the US there is really nothing available in France that is simple, other than direct ownership of shares,” explained Maeve Hoffman.

The policy holder would need to declare ownership and declare the capital gain (when the shares are sold). While investing in individual securities takes time to research, it is one of the simplest ways that Americans living abroad can invest. To Hoffman the important benefit to Americans living in France is that owning individual securities (stocks and bonds) is that “there is no financial institution between you and the ownership,” because it is “a personal thing.”

Bernier explained that when working with a cross-border financial adviser, like himself, individual securities can be purchased “for Americans living in France in the Euro or in the US dollar.” He specified, though, that with euros, he “would buy European shares and with US dollars I would buy US shares.”

Property – Hoffman also recommends investing in property, though she noted some things Americans should be aware of.

“Property is completely different. It is an excellent assets class,” explained the financial expert. “Everybody should have a basket of assets: some instant cash, some medium term investments, long-term pension investments, and if you have access, property investments.”

“You should not put all your eggs in one basket, because property is not liquid.”

She warned Americans looking to invest in French property to be aware of “the potential for wealth tax if we are talking about significant assets, rents not being very strong, capital growth not being very large outside of the big cities,” and the fact that “renting can be a nightmare as the legislation is in favour of the tenant.” Hoffman concluded that “the taxation is, like all tax in France, heavy.”

Ultimately, she advises investing in property if you are doing so in a “growth area” with reasonable rent-return, and doing so with a property that you could see yourself living in one day.

For those looking to save for a home, Hoffman recommends the “PEL” (Plan Épargne Logement) – a short-term savings plan that is “attached to a more attractive interest rate for lending.” According to the financial adviser, this “demonstrates capacity to save” and it is a good option for first-time home buyer’s.

As for US-based investments, Cedric Bernier recommends that Americans continue to put money toward their pensions based in the US. The benefit to this is that pensions are taxed in their country of origin, so an American Roth IRA would only be taxable to the US government, not by France.

According to Bernier, Americans can also pay into French employee-savings pension plans. While technically French-based pensions should not be taxed by the American IRS, Americans should still take care to consult a financial adviser before beginning to invest in a French-employer based pension plan (either a PEA or PER) to ensure that the funds will not be incorrectly recognised by US tax authorities as a passive investment. There can be grey areas depending on the plan, and if money can be taken out after five years, typically “they are not considered retirement accounts.”

Bernier specifically recommends converting a traditional IRA to a Roth IRA. “There is a great benefit to doing a Roth conversion, because there is no limitation as an expat so you can convert that pension IRA into a Roth IRA that will be tax-free forever.

You can do this over many years – a small amount every year – then you pay little in taxes. If you do it in one year, then you will pay taxes on the full amount that you do. Then, once converted, the Roth IRA will be tax-free forever.”

Americans should be aware of rules regarding paying into IRAs, 401ks, and Roth IRAs while in France. For instance, income contributed into a Roth IRA should be “earned income after any tax exemptions” and it should not be “more than the earned income limit.”