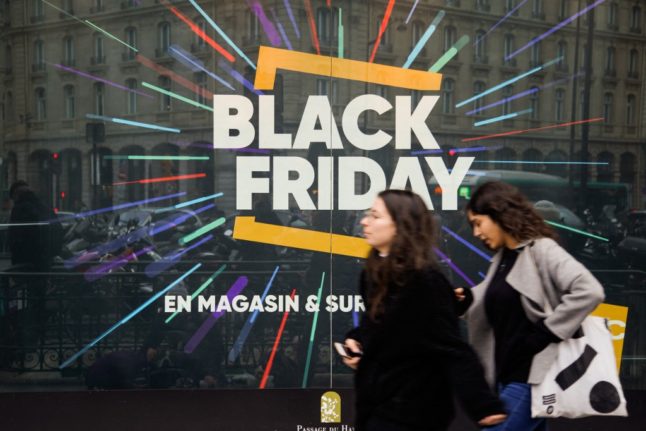 In 2018 pedestrians walk past a store window with a sign announcing the so-called "Black Friday" sales, in Paris. (Photo by STRINGER / AFP)

While Black Friday does exist in France, you are unlikely to find giant lines stretching outside of department stores, with anxious shoppers prepared to even spend the night on-site to secure the best possible deal.

The event itself is relatively new to France – it did not cross over the Atlantic until after 2013. While French Black Friday is still rather minuscule in comparison to the United States, most large retailers do participate at some level.

One primary difference is that the sales might not be as encompassing as they would be in the United States. In fact, Black Friday is not even the primary sale of the French calendar year.

Technically, these two sale periods are the only time that stores are allowed to have sales, but the definition of ‘sale’ is important. Basically, the French government qualifies a ‘solde’ as the store selling an item for less than they purchased it for.

During the rest of the year discounting is allowed in certain circumstances, which is what you are likely to see on Black Friday in France. This means that stores might sell items for less than their original price, but not below what they bought the item for, which is why the discounts you are expecting on Black Friday in France might not be as far-reaching as those in the United States.

A big advantage to Black Friday in France, however, is that consumer protection rules still apply, even when items are marked down. This means that consumers are still entitled to a refund if the item has not been expressly indicated as faulty.

In terms of store participation, you can definitely expect large retailers like Amazon, Cdiscount, Groupon and Sephora to offer sales, and some small stores and shops also participate.

The three sectors in France that found particular success on Black Friday in 2020 were tech, fashion, and beauty – making it a popular day to buy electronics, clothes, skincare items and makeup.

Specifically, the French news organisation, Le Figaro, found that among tech items, the best deals tended to be on televisions, which saw a price reduction of 16 percent on average in 2021.

Le Figaro also noted that Black Friday in France has become particularly popular online, with many shoppers preferring to make purchases online rather than in person.

What do French people think of it?

The event has certainly become a tradition in France in recent years – with more than 6 out of 10 French people making purchases each Black Friday and many seeing it as the prime time to shop for Christmas presents.

According to a 2020 Poulpeo study on the French and Black Friday, the average shopper had a budget of approximately €330. The study also showed that one in three French people see the event as a “good way to save money and do their Christmas shopping early.”

Additionally, the study found that almost half (46 percent) of shoppers in France planned to buy from small retailers.

Nevertheless, even though Black Friday has become more popular in France, there has still been some resistance to the American tradition.

In 2019, more than 200 brands joined a collective called “Make Friday green again” with the aim of boycotting the US-inspired sales day. The brands argued that Black Friday encourages “artificial overconsumption” – which harms the environment due by encouraging overproduction and damages workers’ rights.