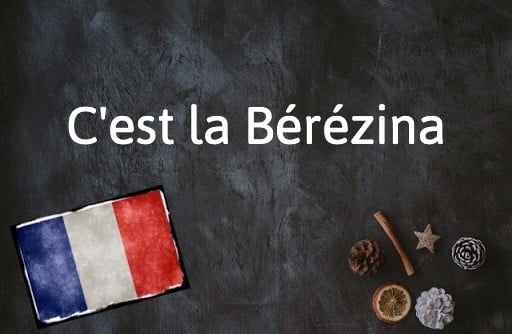 Why do I need to know c’est la Bérézina?

Because if you find yourself in this type of situation, you will certainly want a phrase to complain about it.

It means “a nightmarish scenario” and is often used to describe tense, impossible situations.

This expression has an interesting history – it refers to the defeat of the Napoleonic army in 1812.

Napoleon led his troops to Russia, hoping to force Tsar Alexander I to cease trading with Britain. But when the French army found itself forced to retreat from Moscow, tens of thousands of Napoleon’s soldiers died, mostly of cold and starvation.

During the retreat, the Emperor made a crucial error when attempting to cross over the icy Berezina River (located in modern-day Belarus). Napoleon and his troops soon found themselves trapped with Russian forces on either side. Eventually, the French were able to cross the river – and avoid total annihilation – but at the huge cost of thousands of lives.

Thus, the expression “c’est la Bérézina” was born – to describe a crucial, yet complicated and nightmarish, situation.

But you don’t need to be trapped by an opposing army to use this, these days it’s used for all sorts of nightmare situations.

Complaining about nightmare scenarios is a popular sport in France, so there are plenty of alternatives