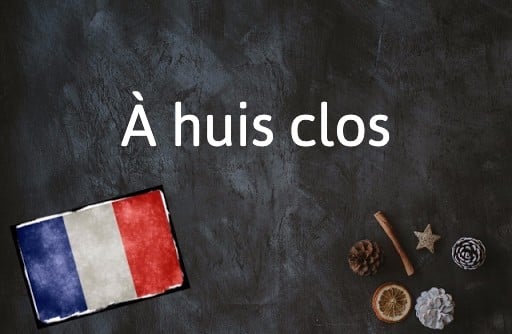 Why do I need to know à huis clos?

Most likely, you’ll see the French press use this terminology to describe a closed-door meeting – or a “réunion à huis clos” – when discussing politicians or public figures.

It is also often used in courtroom settings: a judge might order the hearing to be held in private if proceedings are particularly sensitive, or if they could be a “danger to the public order”.

The expression dates back to the 16th century, and it is originally derived from the Latin word “ustium”, which gave rise to the old French word “huis” – meaning door.

Originally, it simply meant “closed door” but over time the phrase went on to mean “in private” or “without publicity.”

Ils ont tenu la réunion sensible un huis clos, pour être sûrs que personne d’autre ne pourrait écouter. – They held the sensitive meeting behind closed doors, to be sure that no one else could listen in.

Le public ne serait pas admis dans la procédure judiciaire car le juge a ordonné que l’audience se déroule à huis clos. – The public would not be admitted into the judicial proceeding because the judge ordered the hearing to be behind closed doors.