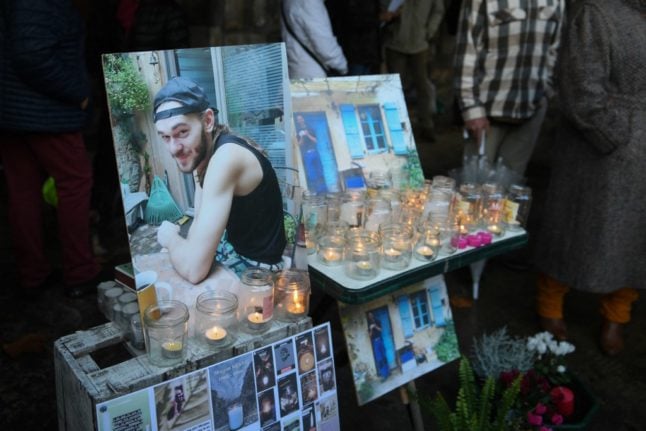 Portraits and candles are displayed during a march to pay tribute to Morgan Keane, who was killed by two hunters, in Cajarc, southwestern France. (Photo by Valentine CHAPUIS / AFP)

The death of Morgan Keane, a Franco-British man aged 25, caused outrage in 2020 when he was shot while cutting wood near his house in the village of Calvignac in southwest France.

The man who fired the fatal shot and the 51-year-old organiser of the hunt went on trial on Thursday in the nearby town of Cahors, charged with involuntary manslaughter.

“There isn’t a day I don’t think about it, it’s marked me for life. I’m sorry,” the shooter told the court, admitting that he had not “identified the target”.

The case has revived tensions between anti-hunting activists and defenders of a rural hobby and practice that is seen as necessary by farmers to keep down deer and boar populations in particular.

During the busy times of the hunting season, large parts of the French countryside reverberate with the sound of gunshot, leading many walkers to avoid forested areas for their own safety.

“A lot of people support us,” said Audrey Tindiliere, a member of a collective campaigning for restrictions which was set up after Keane’s death.

“Eighty percent of people are in favour of strengthening the regulation of hunting in order to improve the sharing of the countryside with hunters,” she told AFP before the trial.

State prosecutors called for the shooter to be given a two-year jail term, with 18 months suspended, underscoring “the seriousness of the shortcomings that led to the death of Morgan Keane”.

A verdict is expected on January 12.

Hunters form a powerful political lobby in France through the National Federation of Hunters (FNC).

The head of the FNC, Willy Schraen, called for an “exemplary verdict” in the Keane case, an acknowledgement of the strong public feelings around the death.

Keane, whose father was British and mother French, was inside the boundary of his property.

“We ban hunters who do not respect the most basic rules. It mustn’t happen again. It’s unacceptable that this mistake led to the death of a man,” he said.

“If you don’t know what you’re shooting at, you don’t shoot.”

The number of hunting accidents has fallen over the last 20 years, according to the government’s Office for Biodiversity.

There were 90 accidents during the 2021/22 season, eight of which were fatal, including two people who were not hunters, the figures show.