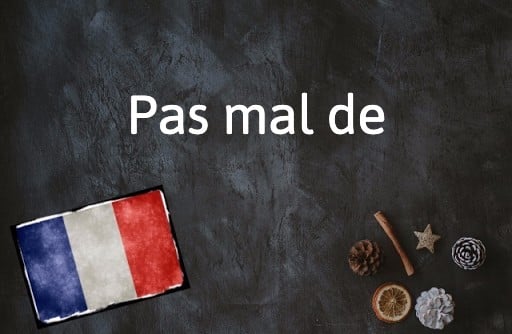 Why do I need to know pas mal de?

Pas mal de – roughly pronounced pah mal duh –  is a French colloquial expression that translates precisely to “not bad of.”

This likely sounds a bit nonsensical, but in reality the phrase means “quite a few” or “a lot of.”

In English, if someone asks you how many restaurants are in your neighbourhood, you could shrug and say “not a bad amount” to say that there are a handful. But in French, this phrase is moreso used when there are several of something.

For example, someone might ask how many people are at the party, and if you respond that there are “pas mal de gens” then that would be taken to mean that there are quite a few people present.

The phrase “pas mal” (not bad) in itself is more positive in French than it might be in English. If you were to perform very well on an examination, your professor might say “pas mal!” which would be taken to mean “well done” or “good job.”

Faites attention en marchant près du quai, il y a pas mal d’abeilles dans cette zone. – Be careful walking by the dock, there are quite a few bees in that area.