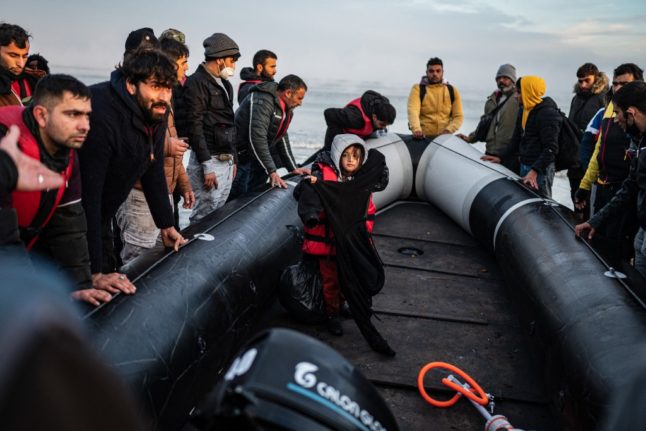 Migrants move a smuggling boat into the water at Gravelines, near Dunkirk, northern France. (Photo by Sameer Al-DOUMY / AFP)

The arrangement will lead to a 40 percent increase in the number of patrols to detect boats before they set out to sea, with UK officers joining their French counterparts for the first time.

That means an additional 100 officers will be involved in operations.

For the first time, teams of observers will be deployed on both sides of the Channel to “strengthen common understanding”.

The latest agreement comes just over a year after a previous deal saw France increase the number of police officers, gendarmes and customs agents dedicated to patrol its northern coastline to 650, in return for €63million in UK funding.

There is not much in the way of in-depth detail available at the moment, but the new deal reportedly includes an agreement for extra investment in port infrastructure in France, better use of technology, including drones, and “greater cross-Europe cooperation”, as well as better coordinated information-sharing and efforts to offer migrants help and assistance before they make the dangerous crossing.

And part of the funding will be available for reception and removal centres in France for migrants prevented from travelling to the UK, to further deter crossing attempts, a UK government statement said.

Britain’s Home Secretary Suella Braverman said, after signing the agreement with French opposite number Gérald Darmanin: “We must do everything we can to stop people making these dangerous journeys and crack down on the criminal gangs.

“This is a global challenge requiring global solutions, and it is in the interests of both the UK and French governments to work together to solve this complex problem.”

READ ALSO What is France doing to prevent ‘illegal’ Channel crossings to UK?

Adopting a more cooperative tone to the rhetoric she has employed in the House of Commons, Braverman added: “There are no quick fixes, but this new arrangement will mean we can significantly increase the number of French gendarmes patrolling the beaches in northern France and ensure UK and French officers are working hand in hand to stop the people smugglers.”

Joint British and French collaboration has already prevented over 30,000 illegal crossing attempts since the beginning of 2022, according to official figures – a year-on-year increase of more than 50 percent compared to the number of attempts thwarted in 2021.

Despite these efforts, about 40,000 people – mostly Albanians, Iranians and Afghans – have crossed the Channel to England from France this year. That figure is well over last year’s 28,561, which was a thousand-fold increase from 2018 when migrants and asylum seekers first began sailing inflatables across one of the world’s busiest shipping channels.

The French government has previously said that the British government’s decision to close legal routes for people to apply for asylum from outside the UK is at least part of the problem, leaving them with little choice but to risk their lives in the Channel.

They also claim that the lack of ID cards in the UK acts as a draw to people who believe it is easier to work illegally. The UK government rejects both these points.

On the Channel coast, doubts remain about whether incremental changes in the number of French officers patrolling the rugged dunes and wide beaches can reverse the rising tide of crossings.

Observers say the migrants’ boats are getting bigger, the tactics of smugglers more sophisticated, and departures are being recorded along a widening stretch of coastline.

Some 972 people were detected making the crossing on Saturday and 853 on Sunday during calm, sunny weather, according to UK figures.

The French coastguard is adamant that it cannot intercept boats once they are in the water because attempting to do so could cause them to capsize.

“I’ve watched so many British ministers over the years coming new to the problem and deciding that they are going to get a grip and somehow solve it,” former British ambassador to France, Peter Ricketts, told AFP.

“But they all end up falling back on the realisation that the only way to bring this under control is by working with the French,” he said.

“To their credit, the Sunak government has reached that conclusion quickly and today’s agreement is good news,” he added.