A migrant child plays in a cardboard box with the inscription "France" aboard the Ocean Viking rescue ship on November 10th, 2022. France accepted the ship after Italy refused to allow it to dock.(Photo by Vincenzo Circosta / AFP)

A row between France and Italy escalated further on Friday morning, as Italian Prime Minister Giorgia Meloni slammed what she called the French government’s “incomprehensible and unjustified” response to taking in a migrant rescue vessel rejected by Rome.

France had warned Italy of  “severe consequences” on Thursday after it accepted the Ocean Viking rescue ship carrying 234 migrants amid a blazing row over which country is responsible for them.

France has never before allowed a rescue vessel carrying migrants from the Mediterranean to land on its coast, but did so this time because Italy had refused access.

Italian leaders had on Wednesday claimed that France was ready to accept the ship – leading to suggestions that Italy’s government had tried to force France into accepting the rescue ship by announcing a deal when there wasn’t one.

Paris immediately hit back, saying on Thursday it would accept the ship but would suspend another deal to take thousands of migrants from Italy.

How did this start?

The Ocean Viking ship had initially sought access to Italy’s coast, closest to where the migrants were picked up, saying health and sanitary conditions onboard were rapidly worsening.

Italy refused, saying other nations must take in more of the thousands of migrants trying to reach Europe from North Africa every year. 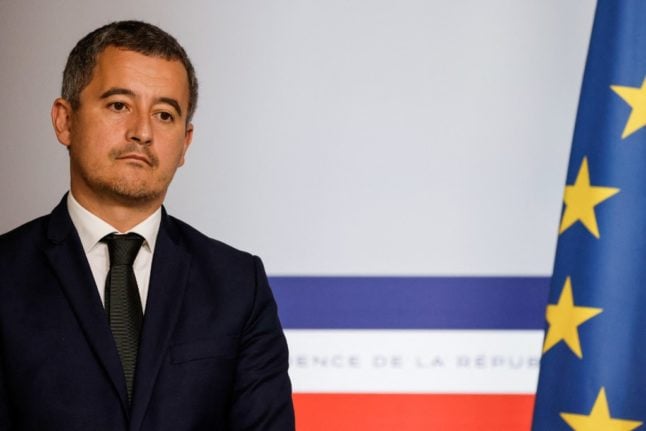 French Interior Minister Gerald Darmanin said on Thursday the Ocean Viking could dock at the port of Toulon and a third of the migrant passengers will be “relocated” to France. (Photo by Ludovic MARIN / AFP)

He slammed Italian authorities for “making the migrants wait at sea for 15 days”.

Later on Thursday and again on Friday, the Italian government also used the word “incomprehensible” to describe France’s response to allowing a migrant ship to disembark in a French port.

Italy’s refusal this week to allow migrants to disembark is a move that will please the new government’s far-right, Eurosceptic support base, and is thought also to be intended to force other countries to accept changes Italy wants to make to the EU-wide policy on accepting and distributing asylum seekers between member states.

Italy’s Foreign Minister Antonio Tajani said this week that the government was sending a “signal” to other EU nations that international law must change.

Under international law, ships in distress or carrying rescued passengers must be allow entry in the nearest port of call – which means Italy and often Malta must take in those rescued after trying to cross the Mediterranean from Libya.

In June, around a dozen EU countries, including France, agreed to take in migrants who arrive in Italy and other main entry points.

People on the deck of the Ocean Viking rescue ship in the Gulf of Catania in the Mediterranean Sea in international waters on November 6th, 2022. (Photo by VINCENZO CIRCOSTA / AFP)

Rome wants “an agreement to establish, on the basis of population, how migrants with a right to asylum are relocated to various countries”, Tajani said ahead of a meeting of EU ministers next week.

But commentators said Italy’s tactic of apparently forcing France to take the ship could easily backfire.

The hardline policy is led by Meloni – the leader of the post-fascist Brothers of Italy party, who once said Italy should “repatriate migrants back to their countries and then sink the boats that rescued them” – and anti-immigrant League leader Matteo Salvini, known for his policy of closing Italian ports to rescue ships as interior minister in 2019.

Their hardline stance is expected to lead to strained ties that complicate decision-making on a range of subjects at the EU level.

“We’re seeing diplomatic arm-wrestling between France and Italy that could open a breach for similar conflicts, because Italy is clearly challenging a European accord (on migrants) that was in its favour,” Matthieu Tardis of the French Institute for International Relations told AFP.

How has France reacted?

Darmanin on Thursday warned of  “severe consequences” for Italy’s bilateral relations with France and the EU as a whole, and said Italy’s refusal to accept the migrants was “incomprehensible”.

He said France had acted according to its “humanitarian duty”, but the migrants were Italy’s responsibility under EU rules, and that the French move was an “exceptional” measure that would not guide future action.

What are the consequences?

The row has gone beyond a war of words as France has suspended a plan to take in 3,500 refugees currently in Italy under a European accord and urged Germany and other EU nations to do the same.

Salvini, now back in government as infrastructure minister – meaning he has control of Italy’s ports – has again pledged to follow a hard line on preventing migrant arrivals.

The row over migrants marks a return to fractured relations between France and Italy after previous cooperation under Mario Draghi’s government.