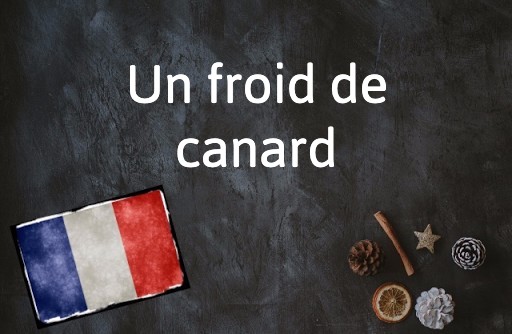 Why do I need to know un froid de canard ?

Because you might be curious why your French friends are talking about cold ducks.

The exact translation of this phrase in English is “the cold of duck” or a “duck cold,” but the true meaning has more to do with the cold than it does mallards. It is a way of saying “freezing cold” in French.

There are two ways that linguists have interpreted the expression. The first is that the expression is simply shortened, and that it used to be “it’s as freezing cold as a duck’s feet” – in reference to how ducks’ feet might get stuck in frozen lakes during the winter months.

But most people think the expression actually comes from the world of hunting, which is an important tradition in France. The idea is that temperatures would need to be sufficiently cold for ducks to move away from frozen ponds and out into the open of streams and rivers, where they would be easier for hunters to shoot. The idea was that once you started seeing more ducks – and they became easier to hunt – that meant the weather had gotten sufficiently cold for them to come into the hunting territory to begin with.