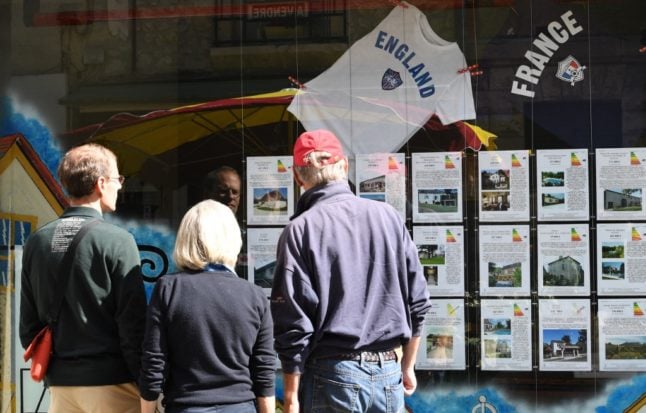 People look at property advertisements in an estate agency dedicated to British buyers, on June 16, 2016, in Eymet, southwestern France, in the Dordogne region where a large population of British expatriates live. (Photo by Mehdi FEDOUACH / AFP)

Owning a second-home in France is a dream for many – both French and foreign alike. Some imagine a life on the Breton coastline enjoying fresh seafood and cidre, while others aspire to a chalet in the alps.

Properties that do not function as a primary residence (maisons secondaires in French) are common in France, in fact according to a 2021 study by the National Institute of Statistics and Economic Studies (INSEE), they make up approximately one in ten properties in France overall.

Using data from 2017, INSEE found that second-homes account for 3.2 million properties in France – of which around 90 percent have French owners and the remaining 320,000 are owned by people living in another country.

The largest single group of foreign second-home owners are Brits, followed by Belgians, Italians and Swiss.

They are also more likely to be located in some parts of the country than others. Over a third (33 percent) are in mountainous areas, while about 18 percent are on the coast, particularly the west coast and around the Mediterranean.

When broken down by département, the preference to be near the water and the ski resorts becomes particularly visible, as shown on the map below:

When broken down by municipalities - or EPCI's (Public establishment of inter-municipal cooperation), a designation used by INSEE - it is easier to zoom in on the smaller localities within the départements shown in the map above that have the highest proportions of second home owners.

The five communes in France with the highest portion of second-homes are all in the mountains.

The area with the most second homes proportional to total properties, as of 2019, was Germ in the Haut-Pyrénées département - a ski resort where 96.97 percent of the properties are classified as second-homes.

As for the other top four communes, three are located in the Alps and the fourth is located in the Pyrenees mountains. All of these areas have over 92 percent of their local properties reported as second-homes.

The relatively cheap property prices in some parts of France, especially rural France, means that having a second home is not only the preserve of the super rich. French people often inherit family properties which can be used as a second home, and this plays a part in the French preference for taking summer holidays within France.

However, being a second-home owner in France is becoming an increasingly expensive reality, as several areas that qualify as "zones tendues" - urban areas of more than 50,000 inhabitants with a housing shortage. In those areas, local authorities have the ability to increase taxes (taxe d’habitation) for second-homes.

The "zones tendues" which voted to increase the residence tax to the maximum 60 percent are Paris, Lyon, Bordeaux, Nice, Biarritz, Arles, and Saint-Jean-de-Luz, with Marseille also recently voting to increase its taxe d'habitation as well.

While it is worth noting that several cities and localities might qualify as "zones tendues," that does not mean they have chosen to increase residence taxes.

But the list of zones is growing, and the Loire-Atlantique city of Nantes was recently added to the list. You can check whether your town is in a zone tendue here.

Nevertheless - as shown on the maps, many second-home owners prefer to buy property away from the cities and most populous areas.