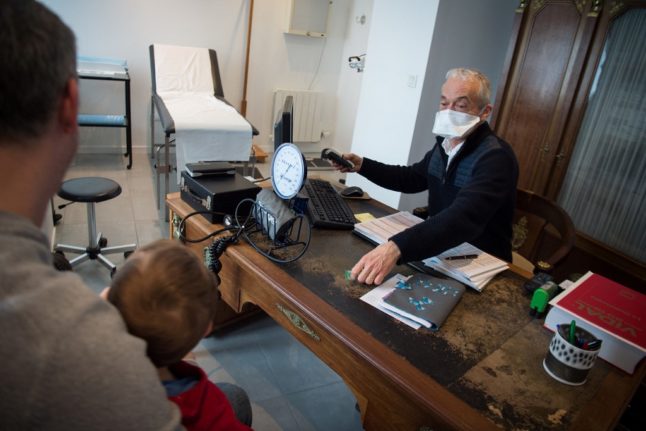 A medical desert is a geographical zone where healthcare providers and general practitioners are severely lacking compared to the rest of the country – it generally refers to healthcare in the community such as GPs or family doctors, dentists or community nurses, rather than hospitals.

Authorities are proposing solutions to allow patients to find a doctor more easily – more on that later. But, first, what can you do if you are one of the estimated 30.2 percent of the population in France who live in one?

Sadly, not a huge amount – such issues aren’t solved easily. But there are a couple of things.

Firstly, complain. Anyone having difficulty registering with, or even just finding a doctor within reasonable travel distance has the right to ask for help from the health authorities, by writing to the local health insurance office.

READ ALSO Medical deserts: Why one in three French towns do not have enough doctors

This will not immediately solve the problem. But it does, at least, highlight it with the appropriate body responsible for dealing with it.

You can then, if you feel it necessary and after first reporting your problems finding a GP, write to the health insurance conciliator. The conciliator’s job – as well mediating in any disputes – is to help users with their healthcare needs, including finding a doctor.

The Ameli website has a form letter here. It also helps you find the address of the conciliator.

The biggest problems with medical deserts is finding a médecin traitant – the GP or family doctor that you are registered with.

READ ALSO How to register with a doctor in France?

However it’s worth knowing that you don’t have to be registered with a doctor in order to get an appointment with them, so if you find a doctor with available appointments you can book one, even if that doctor is unable to register you as a traitant.

The medical app and booking website Doctolib is a good place to start, although it usually has more users in the cities.

How to use the French medical site Doctolib

Some health centres in medical deserts offer special arrangements for people who are unable to find a médecin traitant, such as registering you as a patient after a certain number of consultations.

If your area has a shortage of doctors, it’s likely that you will end up having to register with a GP a long way from your home.

Many doctors now offer online consultations – known as télémedicine – which may be a practical alternative to making long journeys to the doctor’s office.

Costs for téléconsultations are covered by Social Security like a traditional doctor’s appointment and allows patients to benefit from remote medical help via a computer, a tablet or a smartphone.

The doctor with whom the patient is in contact can make a diagnosis, prescribe medication or tests. The Ministry of Health points out that téléconsultations are subject to “the same quality and safety requirements as conventional procedures”.

If you either can’t find a doctor or your doctor is far away, there are other medical services on offer in France, including SOS Médecins (which includes house calls) and Maisons Médicales de Gardes, which are community health centres that include out-of-hours services.

Remember also that all pharmacies have a trained pharmacist on the premises, who can deal with minor ailments and give medical advice.

Nearly six million adults in France are not registered with a GP or family doctor, according to government figures.

In an effort to ease the problem of declining and uneven levels of medical care across France in the short-term, President Emmanuel Macron encouraged retired doctors to continue working.

During a wide-ranging TV interview in October, Macron was questioned about the issue of medical deserts. He said: “All doctors who retire, we will allow them to retire […] but on the first day of their retirement, to continue their activity and to keep all the income that is theirs, without paying new pension contributions.”

In addition, Emmanuel Macron completed his speech by announcing that he wanted to, “give more responsibilities to our nurses, physiotherapists, pharmacists, all our paramedics, psychologists and others so that many tasks that are done by our doctors can go to them.”

The government’s plan to improve uniformity of medical care in France has four priorities:

But one suggested solution – extending the general medicine residency by one year, during which future practitioners would be strongly encouraged to settle in the ‘desert’ areas – prompted medical students to go on strike.