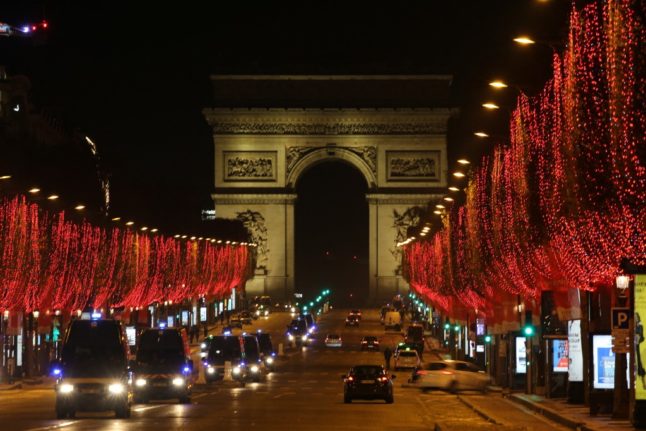 Christmas lights on the Champs-Elysee in Paris. Photo by Stefano RELLANDINI / AFP

The French government’s sobriété enérgetique (energy-saving) plan for winter has plenty to say about lights – people are advised to turn off the light in any room they’re not using, while local authorities will be switching off early the lighting on monuments such as the Eiffel Tower and even street lights in some areas.

Even the famously opulent palace of Versailles – which gives rise to the phrase C’est pas Versailles ici (meaning, turn the lights off, we’re not millionaires) – will turn down its lighting this winter.

So what does this mean for the popular Christmas light displays that most French towns put on in late November and December? Or Lyon’s famous Festival of Lights?

Perhaps the best-known Christmas lights display is on the Champs-Elysée – 4km of lights with 20,000 bulbs.

This week, organisers confirmed that the traditional display will go ahead, but with two important modifications; the lights will be switched off at 11.45pm each night – two hours and 15 minutes earlier than previous years – and the display will be up for six weeks instead of the usual seven.

The head of Blachère Illuminations, which creates the Champs-Elysée display – says that thanks to LED lightbulbs, the display actually uses surprisingly little electricity, costing €50-€60 a day in power bills.

The display will be switched on on Sunday, November 20th by actor Tahar Rahim.

In most big cities, local authorities have adopted similar plans- festive lights displays will happen, but in a pared-down form.

For a large city, Christmas lights represent only around 0.2 percent of their annual electricity usage – but while savings may be minimal, many mayors have spoken of wanting to set an example through small gestures.

Strasbourg – the town that bills itself ‘France’s capital of Christmas’ is going ahead with its display, but with 10-20 percent fewer bulbs than usual. The display will also end on January 8th – one week earlier than normal – and lights will be turned off at 11pm instead of midnight.

Bordeaux – the deputy mayor of Bordeaux said: “We plan to keep the same illuminations as last year but reduce the lighting time.” In practice this means beginning on December 9th, two weeks later than usual, and turning the lights off between 1am and 7am.

Toulouse – the light display will be two weeks shorter than usual – turning on one week later in December and off one week earlier in January.

Caen – the Normandy town will also be turning off lights early, at 11pm instead of midnight.

But some towns have announced that they will cancel the displays altogether. Municipalities that have announced a total cancellation include Morbihan and Quimper in Brittany, Béthune in Pas-de-Calais and Boussy-Saint-Antoine in Essonne. 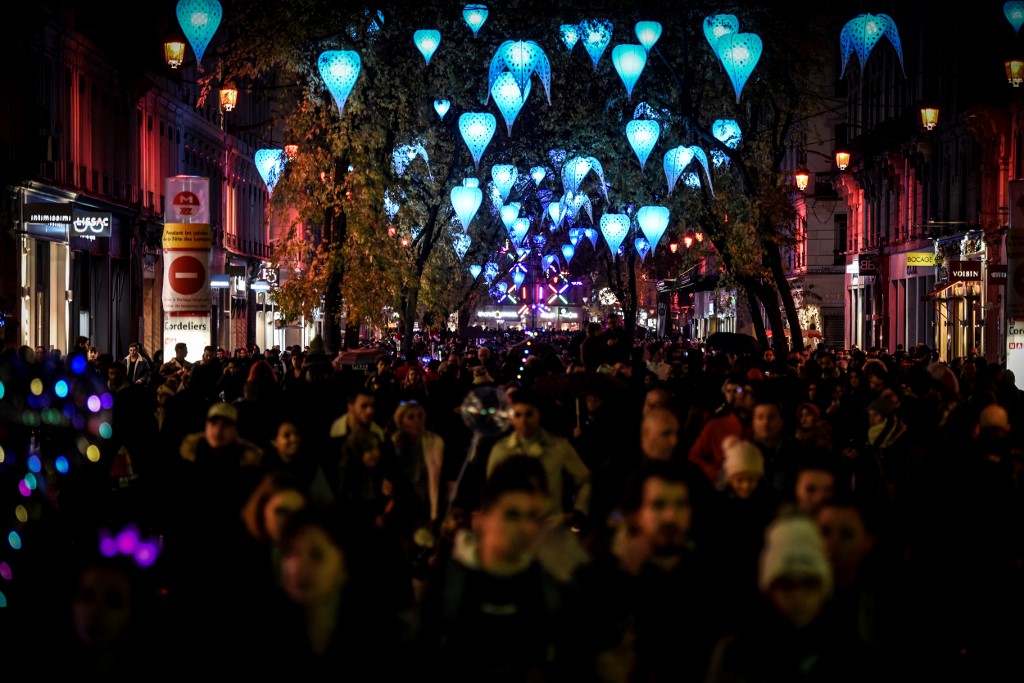 One of the displays at the 2018 festival of light in Lyon. Photo by JEAN-PHILIPPE KSIAZEK / AFP

But undoubtedly the most beautiful light display in France is in Lyon, when the whole town is given over the the Fête des Lumières (festival of lights) in early December.

This year’s festival – running from Thursday, December 8th to Sunday, December 11th, will go ahead, local authorities have confirmed, with around 30 sites illuminated in astonishing displays of light and colour, often accompanied by music.

City authorities, confirming that the festival will go ahead, said that the 30 displays over five nights represent “a drop in the ocean” of the town’s annual energy use, while the festival brings in thousands of visitors.

Deputy mayor Sylvain Godinot, said: “The impact of the Festival of Lights on the city of Lyon’s energy consumption is absolutely marginal, which is what allows us to maintain it.

“These are installations that have evolved a lot technologically with lighting designed with a lot of LEDs that ultimately consume very little energy.”

The city’s usual Christmas lights will also go ahead, but will be switched on one week later and switched off one week earlier.