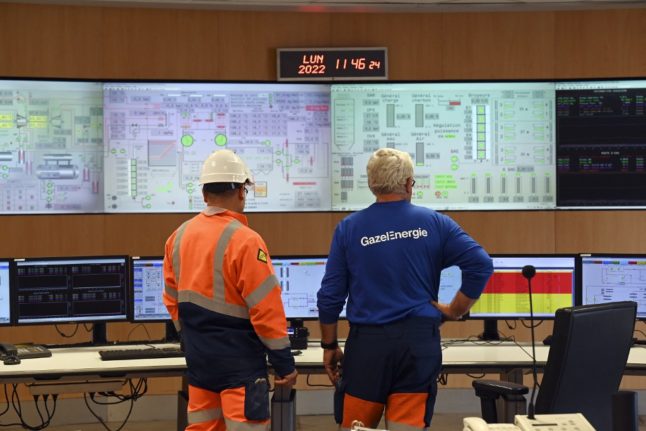 France's nuclear sector is struggling with many plants unable to produce electricity due to technical problems. Photo by FREDERICK FLORIN / AFP

Here is some good news. We will not necessarily freeze at home in the dark this winter. The energy outlook in France, and Europe, this winter has improved enormously.

After a scramble to replace Russian gas with imports from the US, the middle east and elsewhere, it looks like there will be plenty of gas to heat European homes and drive European industry.

Gas stocks across the European Union have reached 93 percent capacity – and 99 percent in France. Wholesale gas prices have fallen 70 percent in the last two months.

The weather is also on our side – for now. It will be 25C in Paris at the end of the week. The tentative long-range forecast from Météo France is for a coldish December but, overall, a mild winter.

There is good news on that front too. An intermittent strike for higher pay which delayed the already backlogged, French nuclear repair and maintenance programme, has been resolved.

Electricité de France (EDF) and the Conféderation Générale du Travail (CGT) trades union federation have reached a deal which will raise pay for the lowest paid workers by 10 percent.

The other – much more publicised – CGT led strike in oil refineries and depots is not quite over. Two out of seven French refineries are still blocked, causing some, continuing shortages for filling stations in the Paris, Lyon and Marseille areas.

But what of electricity? Is there still a threat of black-outs in France this winter?

I asked John Carr, a retired British particle physicist living in the south of France, who runs a website which monitors nuclear issues and fluctuations in power supply in France. To see the site go here and here.

He said: “I have not decided yet if I should go out to buy paraffin heaters. I will wait a month but check stocks (of heaters) at the end of November. It is clearly on the edge.”

ANALYSIS: Is France likely to face blackouts this winter?

Background: the once vaunted French nuclear industry – which usually supplies 80 percent of the country’s electricity with a surplus for exports – is in a mess. Delayed maintenance work because of the Covid pandemic and faults in the cooling systems of a dozen reactors shut down more than half the French nuclear industry this summer.

As bad luck, or bad judgement, would have it, the French power vacuum coincided with the European electricity shortage – and a spike in wholesale prices – caused by the Ukraine war.

There are 56 French nuclear reactors. Thirty are now working. Eight more are expected to come on line by the end of November. France has, in recent days, stopped importing electricity and started exporting again.

It will, however, be a close-run thing whether France has  enough power to keep all the lights on when peak demand is reached in December-February. The electricity supply arm of EDF could buy abroad again but neighbouring countries, including Britain and Germany, will also be close to their capacity limits. They may not have much power to sell.

John Carr said: “I started watching the situation at the beginning of September. The reactor restarts went more or less to schedule until the end of September and then the strikes started…Most ‘updated restart dates’ are (now) a month behind schedule. Today we have 30 gigowatts (billon watts) generation and we should have 40GW. ”

On present predicted trends, John calculates, France should  reach 53GW capacity by the end of December. Actual production is usually 10 percent below full capacity. Production may therefore be around 2GW short of what the country needs in mid-winter in an average year.

Warm weather, imports and the “sober energy use” sought by the government could make up the difference, Otherwise, there will be selective power cuts.

The power crisis has many causes. The outgoing EDF management accuses successive French governments, including President Emmanuel Macron, of shilly-shallying on nuclear policy. It was only just before this year’s election campaigns that President Macron announced plans for a new generation of reactors.

The government places the blame on EDF for failing to keep its reactors in better shape. The electricity giant is already 83.7 percent state-owned but Macron has decided to buy up the remaining shares to bring EDF under complete state control once again.

Another problem has been the repeated delays in completing a a large new generation EPR reactor at Flamanville in Normandy – finally due to open next year, 11 years behind the original schedule. This is similar to the reactor which EDF is building at Hinkley Point in Somerset, due to open in 2027, two years late.

Lessons to be learned? Nuclear power is fraught, politically, technically, environmentally. But we cannot do without it.