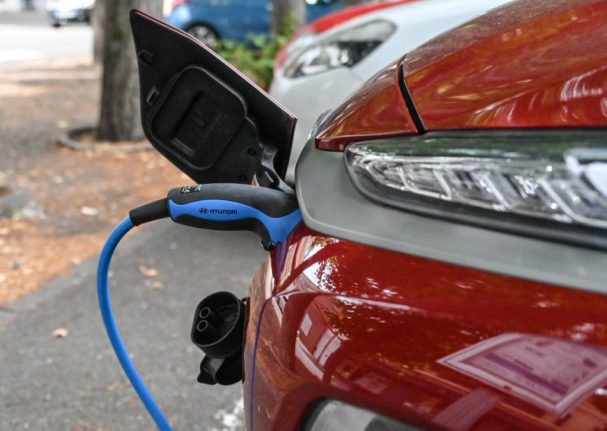 In a partial reversal on previous plans, under which the ecological bonus for motorists who trade in an older car for an electric model was set to fall, Macron said: “Because we want to make the electric car accessible to everyone, we are going to increase the ecological bonus from €6,000 to €7,000 for half of [France’s] households.”

The Bonus écologique (ecological bonus) applies to the purchase of an electric vehicle costing less than €47,000 – €7,000 being the maximum amount available. The government estimates that around half of households will be eligible for the maximum amount.

Listen to our discussing on electric cars and the problems of transport in rural France in the latest episiode of the Talking France podcast.

To support the expected increase in electric vehicles on French roads, the number of charging points will also rise – but installations are currently behind schedule. There should have been 100,000 publicly available charging points (known as bornes) across France at the end of 2022. Current expectations are that the actual figure will be about 72,000.

In an additional boost for those considering switching to electric vehicles, the President also announced that prices at charging terminals will be controlled under the government’s energy price shield.

“From January 2023, we will also extend the price shield to electrical terminals, so that prices remain reasonable,” he said

This is how the bonus écologique – and other aid to buy greener vehicles – works.

The financial aid is available towards the purchase or rental of a new electric or rechargeable hybrid vehicle with CO2 emissions of no more than 50g/km.

The amount of aid depends on the cost of the vehicle – up to the €47,000 maximum – and amounts to 27 percent of the total purchase price, up to the cap amount.

Fully electric vehicles are eligible for higher grants – and, although the aid is not means-tested, the level of grant falls as prices rise to weigh it in favour of lower-income households. So, for an electric vehicle costing about €20,000 a grant of €5,400 would be available, while for one between €45,000 and €60,000 the bonus is limited to about €2,000.

This bonus is available in addition to the bonus écologique for those who scrap their older vehicle when they buy a newer less-polluting one. In order to benefit from this, the scrapped vehicle must have been registered before 2006 for petrol vehicles and before 2011 for diesel ones.

This aid is means-tested. In order to see if you benefit, and how much you may receive, the government has set up an online simulation.

The maximum scrapping bonus for those buying an electric or rechargeable hybrid vehicle with an electric range of over 50km is €5,000. For a more modern, less-polluting thermal-engined vehicle or a hybrid with a lower electric range, the cap is set at €3,000.

Like the ecological bonus, you must keep the vehicle for at least six months and drive at least 6,000 kilometres after purchase or lease before you can sell-on the vehicle.

In addition to government grants, many local grants are also available if you want to buy a less polluting vehicle. All national and local subsidies are listed here by the Ministry of Ecological Transition.