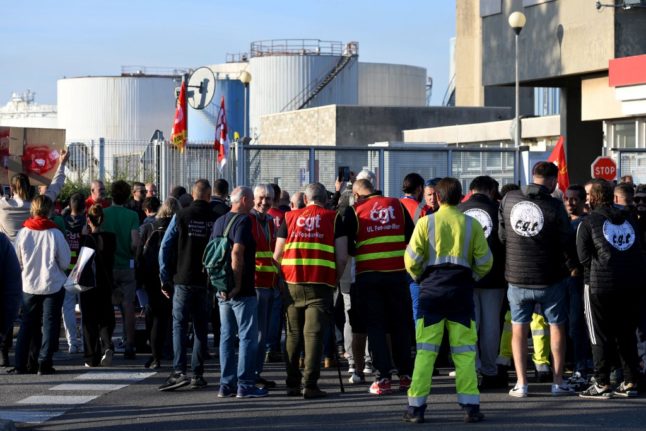 The energy transition ministry said the requisitioning of workers at a Esso-ExxonMobil fuel depot at a refinery at Gravenchon-Port-Jerome in northern France “will begin today”.

Workers at the refineries have voted to continue their strike, defying the government’s announcement that it will use the rarely-used emergency power of ‘requisition’ to force them back to work.

Industrial action to demand large pay rises has paralysed six out of seven fuel refineries in France, leading to nation-wide shortages exacerbated by panic-buying from drivers.

Government ministers have urged a negotiated resolution to the crisis, but on Tuesday announced that they would resort to direct intervention to get supplies flowing again as frustration mounts.

MAP: How to find petrol or diesel during France’s fuel shortages

The state has the powers to requisition refineries and force workers back to their jobs in an emergency, with the risk of fines or jail time for those that refuse. These powers, coded into law in 2003, are very rarely deployed.

Late on Tuesday, TotalEnergies offered to consult unions whose workers were not on strike.

Analysts say the government is reluctant to inflame the conflict, which is being led by the hard-left CGT union, the second-biggest union in France.

The crisis comes at a time of high energy prices and inflation, while TotalEnergies’ bumper profits have caused widespread anger, leading to calls for the group to face a windfall tax.

Those calls have been consistently refused by the government.

The stand-off could add impetus to a march planned by left-wing political parties on Sunday against the centrist government of President Emmanuel Macron and the high cost of living.

“I hope this is the spark that begins a general strike,” leading Greens party MP, Sandrine Rousseau, told franceinfo radio early on Wednesday.