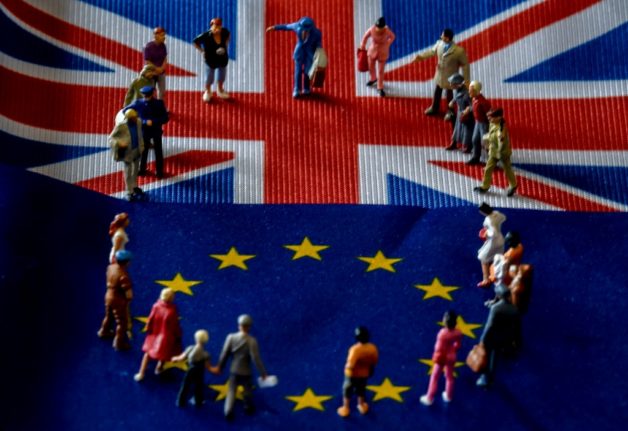 The Franco-British Network, based in Dordogne, was one of four organisations that received UK government funding to help Brits in France deal with the complexities of post-Brexit paperwork and applying for residency cards.

With the deadline to register for residency now passed, the majority of the roughly 200,000 Brits who lived in France before December 31st 2020 have obtained the post-Brexit carte de séjour residency card and full legal status in France.

However there are still problems for a small number of people, while new issues are emerging around the post-Brexit rules, said the FBN’s president Roger Haigh MBE and public relations manager Sasha Smit-Marcardier.

Roger told The Local: “Overall it went pretty smoothly, the French authorities really did bend over backwards to help, they were marvellous, created a streamlined system and a website in English and we at the FBN were fortunate to have a good relationship with the préfectures which helped enormously.

“The FBN also received funding from the British government to help and the British Embassy gave us a lot of practical help, especially in building bridges with French authorities.”

Since Brexit means that British nationals lost their status as EU citizens and therefore their Freedom of Movement, they now need visas or residency cards to live and work in France.

Those who moved here after January 1st 2021, or wish to spend more than 90 days in every 180 here, need to apply for a visa under the same process as other non-EU citizens such as Americans, Canadians and Australians.

READ ALSO How to get a French visa

However those who lived here before December 31st 2020 are covered by the Brexit Withdrawal Agreement and therefore have the right to legal residency, although they were required to apply for a carte de séjour residency card through a special streamlined system that the French Interior Ministry set up.

The huge task of processing the roughly 200,000 applications fell to local French préfectures, but the work of informing Brits living in France about next steps and providing support for those struggling with the process largely fell to volunteers like British in Europe or organisations such as the FBN and the UN, some of which received UK government grants.

The FBN had existed for many years as a Dordogne-based organisation dedicated to improving ties between the British and French communities in south west France, particularly around the businesses community, but Brexit heralded a change in their role.

Sacha said: “Once we received the UK government funding we set up a telephone helpline and a dedicated email address to deal with queries from Brits around the Brexit residency process.

“We had around 10,000 phone and email enquiries – plus around 130,000 website views and Facebook interactions – we took direct supporting action in just under 3,000 cases and we submitted applications on behalf of 59 people – most those who were elderly, infirm or who didn’t have internet access.

“But there were people who found it difficult, an online process is not easy for people who don’t feel confident using the internet, but I think for us the most common queries were from new arrivals who perhaps didn’t have all their paperwork together and who just weren’t used to French admin, which can be quite complicated.

“Many new arrivals weren’t sure what category to apply under – particularly people whose situation was a bit fluid, for example they had retired to France but intended to set up a new business here. There are always cases where people don’t fit neatly into boxes.

“But most people who had been in France for a while and had completed other French admin tasks found the residency process fairly straightforward.

“The other most common problem that we found was long waits for the appointment at the préfecture and cards not arriving by mail, although in our area most of these have now been resolved.”

The deadline for Brits in France to be in possession of the carte de séjour was January 1st 2022, and the vast majority of people now have the card that they need.

However, there are still some people experiencing administrative delays, while a small number of people have missed the deadline to apply. There are also some new applications from family members of Brits who are covered by the Withdrawal Agreement.

Sacha said: “We have had a few enquiries, probably less than a dozen, from people who have missed the deadline to apply, and we have helped with a couple of late applications.

“The website that the French government set up is no longer active, so now you need to apply directly to your local préfecture and the key thing here is the covering letter. You need to send with your application a letter – in French – detailing that you are applying for the post-Brexit carte de séjour under the Withdrawal Agreement and setting out the reasons for your application being late.

“Most préfectures are short-staffed so the important thing is setting out exactly what you need and including all the relevant information and supporting documents so that your application is complete – basically make it easy for the person dealing with your dossier.”

However, she warned that there are some new problems emerging – primarily for people who had been out of France, those joining as family members and second-home owners who had mistakenly obtained a carte de séjour.

Brits who are resident in France and have a post-Brexit carte de séjour have the right to be joined at a later date by certain family members (including a spouse, children or dependant adults), but the family members now need to get a special visa before arriving.

The other issue is that some second-home owners – who live in the UK but own property in France – mistakenly applied for and were granted a carte de séjour. While this means they are no longer constrained by the 90-day rule, it has the potential to create problems with the French tax authorities, as well as issues with healthcare and car registration.

Sacha said: “We have seen a few cases like this, not many but some, and people in this situation should seek professional advice.

“We have advised people who are not actually resident in France to hand their cartes de séjour back to the préfecture, with a formal covering letter apologising and explaining that they misunderstood the system and applied in error. This should be sent via registered mail.”

But with the majority of residency applications now settled, the FBN is turning its attention to the future, especially its mission of attracting economic investment to Dordogne.

Roger said: “We have always been about attracting Brits to invest in Dordogne and we will continue with that, although its undoubtedly true that some things are now more complicated for Brits than they were before Brexit.

“We will also continue to battle misinformation as unfortunately there are still a lot of wild rumours out there, so we would suggest that people don’t pay attention to rumours they see on Facebook, we at the FBN publish a lot of news, but only once we have verified that it is true. If we can’t verify it we don’t publish it.”

BREXIT
Brexit: How Brits in France can secure residency rights for their children
Url copied to clipboard!