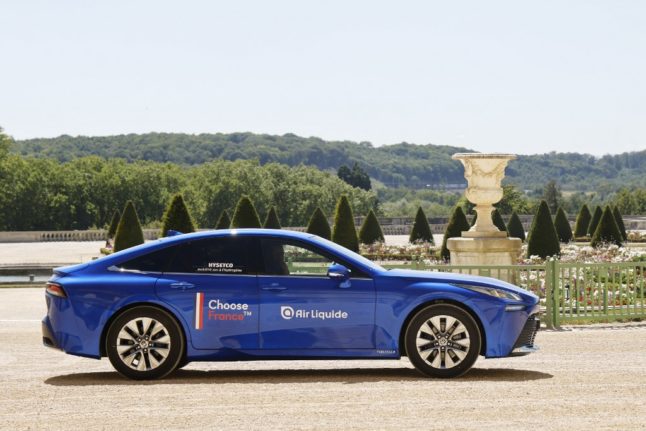 A Toyota hydrogen-powered vehicle for guests is parked during the 5th edition of the "Choose France" Business Summit, at the Palace of Versailles, southwest of Paris (Photo by Ludovic MARIN / POOL / AFP)

French President Emmanuel Macron has made hydrogen one of the five strategic sectors in the France 2030 plan, with €9 billion set aside for low-carbon hydrogen technologies, as part of the country’s ecological transition.

France’s goal is to begin “decarbonising” the industrial process, and on Wednesday, Prime Minister Elisabeth Borne travelled to Oise in north east France to announce the creation of ten hydrogen power plants in France.

The plants themselves, which will be located in seven different regions, will receive state funding of €2.1 billion, and on top of that they will gain €3.2 million from private actors.

The prime minister’s office reported that these ‘Giga factories’ will create at least 5,200 jobs in the country.

They will “produce electrolysers, hydrogen tanks, fuel cells, vehicles, hydrogen trains and other materials,” said the head of government.

These will be part of the first wave of the “Project of Common European Interest” (PIIEC) – defined by the European Commission as “large projects that address a market failure or other important systemic failures in a European context based on common European interests.”

Hydrogen was chosen specifically for its ability to enable heavy transport (trucks, commercial vehicles, buses, etc.) to move away from fossil fuels while avoiding a dependence on batteries. Additionally, the plants have been praised as part of the “ecological transition” for the fact that they only emit water vapour.

You can see on the map below where the plants are set to be built:

Amid the ongoing energy crisis, France is looking to become a world leader in carbon-free hydrogen.

One of the ten plants will be a “hydrogen tank factory” – whose construction will be carried out by the company Plastic Omnium.

This plant will work focus on building technology for commercial, electric vehicles  for companies like Renault.