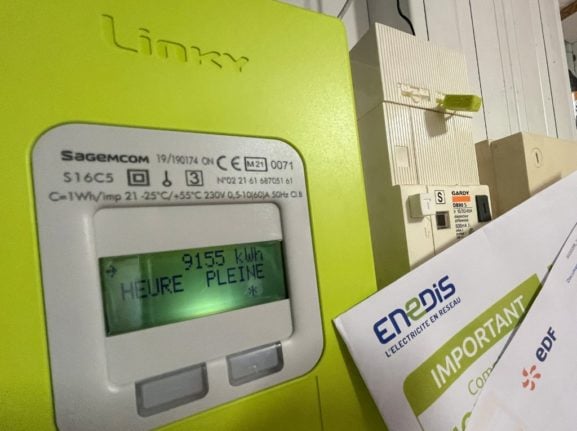 Bill will rise in France in 2023. Photo by DENIS CHARLET / AFP

On Wednesday, Prime Minister Elisabeth Borne held a press conference on the subject on energy bills and announced that, although bills will rise next year, the rise will be contained via a government-imposed price cap.

Here’s what that means for your household bills.

The current pricing arrangements will remain in place for the rest of the year – that means that gas prices are frozen at the level of October 2021, while electricity prices cannot rise by more than four percent over the year.

The price freeze refers to the base rate tariff for customers of EDF – this covers around 80 percent of the population of France.

If you have been on a different tariff – for example a peak-time savings plan or a green plan – that has a fixed term, EDF could move you back onto the base rate once your fixed term expires. The different tariffs are usually cheaper so if you come to the end of a fixed-term tariff and move back onto the base rate, you could say a bill increase of more than four percent.

The price cap also only concerns EDF, so if you are with another company they can increase your bills by more than four percent – although for commercial reasons it’s unlikely that the increase will be significantly larger.

From January, gas bills can increase by up to a maximum of 15 percent for customers of Engie (formerly known as Gaz de France). For the average consumer this will represent a rise of €25 per month, although obviously your bill will vary depending on the size of the home that you are heating. If you live in a small apartment, the price rise will probably be more like €15.

From February electricity prices can also rise, again by a maximum of 15 percent. As before, the cap applies only to customers of EDF who are on the base rate tariff.

This will represent a rise of €20 per month for the average customer.

The price cap covers households but also small businesses – those businesses that have a turnover of less than €1 million per year – and the smaller communes such as village mairies.

Businesses that have seen a decline in profits, or those for whom energy bills represent more than three percent of their total turnover, will also benefit from the regulated tariff.

Although French consumers are among the best protected in Europe from rising energy price rises, the increase in energy bills – coming in partnership with rising prices for other essentials such as food – will still be tough for those on low incomes.

The government has therefore announced a one-off chèque energie of between €100 and €200 for low income households, which will reach 12 million households – or roughly four in 10.

Despite its name, the chèque energie is actually a cash grant, paid directly into your bank account.

The chèque will be paid “at the end of 2022” – an exact date has not yet been announced – and if you received previous grants and chèques energie it will be paid to you automatically.

The grants are usually distributed automatically to people on low income, based on previous year’s tax declarations, but foreigners and recent arrivals can slip through the net, especially pensioners.

If you believe that you are eligible but haven’t received previous grants, you can go to your local CAF office to ask about eligibility.