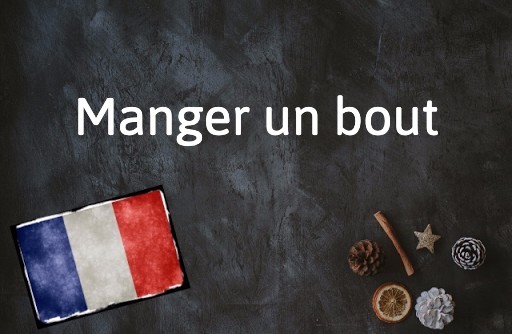 Why do I need to know manger un bout ?

Because you probably feel like doing this most evenings before dinner time.

Manger un bout – pronounced mahn-jay uhn boo – translates precisely to ‘to eat a piece’ or ‘to eat a fragment’, but it really meals eating something that is not quite a full meal – the English equivalent would be ‘to grab a bite’ or ‘to get something to eat’.

The expression implies eating something quick and light, like a snack, instead of a meal. However, it should not be confused with ‘goûter’ which is the dedicated snack hour (usually filled with chocolate and cookies) in the mid-to-late afternoon.

READ ALSO How to snack (or not) like a French person

It is a pretty simple, yet common, expression in French, so you will likely hear it often. If someone offers you to ‘grab a bite’ with them, then you probably do not have to anticipate a long, involved sit-down meal. Instead, you might get a kebab, a sandwich or some easy street food.

Some think that the phrase was popularised by police in the 18th and 19th centuries. The criminal would supposedly be deprived of food until he agreed to confess or betray his accomplices, but when he confessed he was allowed a ‘bite to eat.’

You might also hear another version of this expression: “manger un morceau” (to eat a piece) which carries the same meaning.